As Codex mentioned last week, I had a funeral to attend this weekend. This meant traveling to Oregon to a medium-sized town which happened to have the perfect storm of civic events being held. Almost every hotel & motel was filled, and remaining rooms were being sold for exorbitant fees. The managers weren’t negotiating, either.

So I did the sporkly thing and took off driving while Codex found me a reasonable place to stay. Modern technology is wonderful! Later that day a text arrived with details for my Friday-night haunt.

The first hint that something might be “off” was that the GPS couldn’t find the place. That happens just often enough to be really annoying. No problem. Inspired by those Viagra commercials about life throwing you curve balls, I used some old-fashioned sleuthing skills to track down the address and find a scary-looking motel. It had a junkyard behind it, complete with a dilapidated chicken coop and backhoe blade. The sign advertised “cable TV AND push-button phones”. Shockingly enough, there were vacancies still available.

I’m glad I had called ahead. The gentleman who buzzed me into the lobby asked for me by name. He sat behind an inch of bullet-proof glass, watching at least 20 security camera feeds, with a slot beneath just thick enough to slide a pen through. I made it to the room, somewhat disappointed that nobody had offered me drugs in the ten feet between my vehicle and the door.

I had a few questions for Codex.

“Why did you check me into the Death Motel?”
“What do you mean? It was 2½ stars!”
“That’s the number of meteors that hit the place. Remember the scary motel we used to pass on the way home back in the ’90s? It’s like that, only more terrifying.”
“I am so sorry!  Does it have a television?”

Huh. Yet another comforting thought for the night: Is Codex trying to kill me? Death by sleazy motel?

I began to look around the room. Door lock? Check. Double-check, actually. Fridge: door opens outward and is as wide as the cozy kitchen area. You have to reach over it to put any groceries inside. No human heads. Stove: electric, four burners; they all have torn aluminum foil for traps. Why use something that can only burst into flames once?

I didn’t open any other cupboards or the microwave. Some questions you don’t want answered, right? Thank heavens there were no closets. I would not have stayed.

With the lights out, I noticed red and blue lights flashing from outside. Oh, good, it is the kind of place the police will at least visit.

The cable TV was interesting in that there were nearly 500 channels but you had to pay for most of them. Oddly enough, they offered Ancient Aliens and the sorts of late-night cable shows that mommies and daddies in love might watch. I know Codex wouldn’t approve of either, and honestly, why bother? With the TV off you could catch the live sounds coming through the walls and ceiling.

Was I awake until 2:30am listening for things like my car being vandalized? Yes. Was I awakened at 5:15am with the occupants above balleting across the floor? Yes. Did I ready myself to attend a funeral, check out ASAP and head for a Starbucks in a different part of town? Yes, absolutely.

I’m pretty sure you can find naked pictures of me on the internet now. It was that kind of place. No, I’m not going to point out which spork I am, you sickos.

Around 9:00am I met my parents and had to follow them to the funeral. It was held at a church. My parents didn’t know the address, they just knew where it was. It is one of those sorts of towns. After surviving a night in the death motel, the tire-flavored Starbucks coffee, and a harrowing car chase to the Isla de Muerta of churches, the funeral part of the trip wasn’t looking so bad.

I’ll admit I’ve wandered a fair number of graveyards in my time. In America, we don’t have anything truly old. A couple of the markers dated from the 1870s. In England we found tombstones from the thirteenth century. Of course, voters are much easier to register in America. 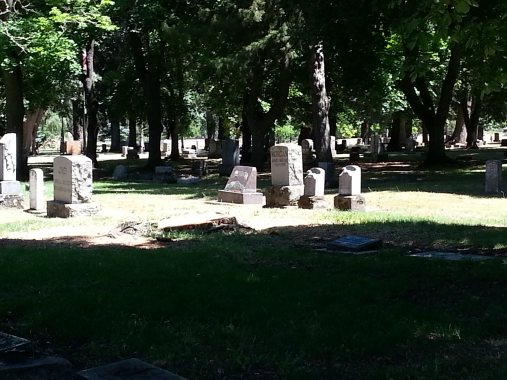 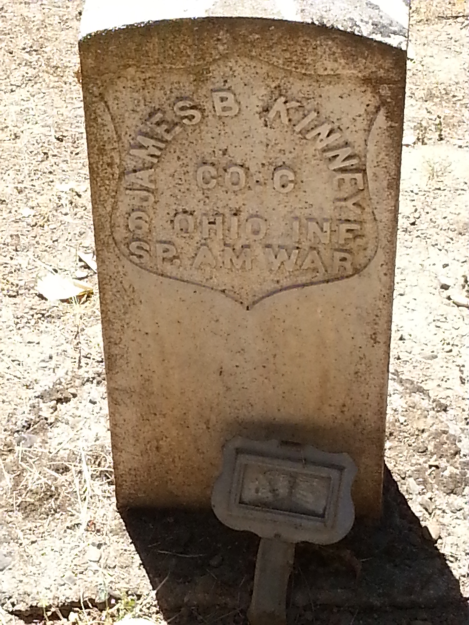 This is from the Spanish-American war. Apparently my great grandfather’s brother rode with Teddy Roosevelt up San Juan Hill. This isn’t him, but they ended up in close proximity, just a few dozen years apart.

While driving home, I unexpectedly encountered what I can only assume were Codex’s hippy Oregon relatives. Normally I’d have kept this little family secret a secret. 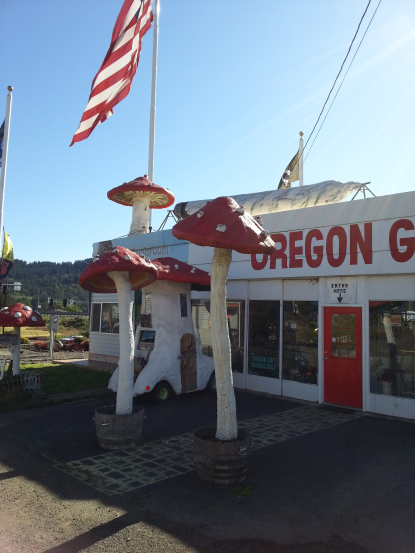