As you may or may not know, we’ll be attending Sasquan this year. We’re very excited. More on that below.

First, we had to get through Tosho-Con, a small, local, anime and manga convention oriented toward teens. It was a good time, we learned how tiring the convention scene can be, and we figured out a price point for Tempest in a Teardrop original artwork. Here are the highlights.

I commissioned this portrait from Jaime, who has participated in Tosho Con for three years. Her artwork keeps getting better. Codex liked the gift, but I think we look a little weird in color.

We had several “original comics” on sale. No takers, but all it takes is one! 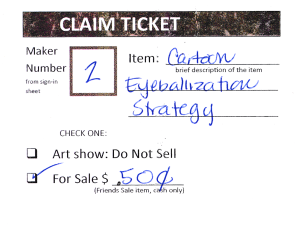 This convention is hosted by the local library, and most of the offerings in the dealer room are donated, with the proceeds going to the “friends of the library”. Thus, everything was super-cheap. Manga books were a quarter. Anime DVDs were a dollar. There were some real bargains!

It turns out young teenagers don’t care for political online comics featuring jokes from before they were born. They wanted Pocky. Oh well, maybe we’ll have better luck at WorldCon!

The highlight was definitely having forty kids ages 4-12 beating each other with giant foam swords, shields, lances, and clubs. You can’t start prepping for our glorious progressive future too early!

Last week is past, and this week is all about the mad scramble and prep for the road trip to Spokane, Washington. It is not just “trip prep”, either, because we’ll be providing behind-the-scenes commentary on all the goings-on we can. Bomb threats? We’ll report ’em. Misogyny? That too. Who does and does not check their privilege in the Real World? We’ll find out, and use as much hyperbole as we have to in order to make it funny. Until they boot us out, anyway.

Buttons and Flyers and Favors, oh my!

Of course, you can still count on us for our regular comic strips. Wow, I have to wrap this up because: busy, busy busy!