An Abject Apology by Sarah the Mouse

This is embarrassing. I don’t have dialog for weeks, but who do they trot out to apologize to our readers? Moi, “the diplomatic one,” as Q said. I applied at Disney before coming here, but they already have a mouse character. The stench of Ren & Stimpy has poisoned the industry for mice, so it was either here or back to the Great Mouse Communist Collective.

I really do hate communists.

What, are you asking, is the issue? Why is an apology warranted? The punchline was left out of yesterday’s comic.

Yes, that is a Bad Thing. A task force has been formed to get to the bottom of what happened. This consists of Brad the Otter, a Ladybug, The Germ, and myself. Say what you want about The Germ, his analysis of situations like this is second to none. It is also hilarious to give a peanut to one of his minions when he is waxing diabolical.

We’ve punished Q and Codex by making them wear yellow stickies with the word “stupid” on them. The humiliation is great, and deservedly so. It is the reason they are not issuing this apology themselves. 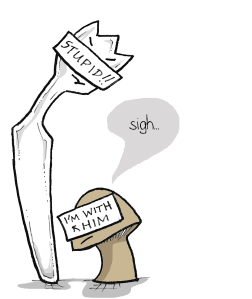 These are the facts as we know them.

This is all preliminary information, and we at Tempest in a Teardrop know you’ll want to blame the wine industry for our troubles. Please don’t do that, wine has a bad enough reputation as it is.

We’ll issue a full report in six weeks, if we don’t otherwise forget about it.

Meanwhile, we have a solution. The onion character in the last frame of the comic entitled “Make Your Own Award” should have said, “A prestigious award? I’m so flattered! I’d like to thank Twitter for making this possible!” You’ll need to do the heavy lifting and scroll down for us and re-read the strip. Eventually, the comic will be archived and we’ll put the corrected version in the archived copy, leaving this whole, embarrassing incident behind us.

At times like this, we need to remember the lesson the Mayans have taught us: if you don’t finish something, it isn’t the end of the world.

Thanks for reading ~ Sarah the Mouse