We have another clip from the producer and director: It turns out that the original pilot episode was scripted for two hours. After the network got antsy in the middle of shooting, they insisted it be trimmed back to a single hour. What we acquired was in-progress edit of the original script of CSI: Dewberry Woods.

As before: the producer is Hildegarde Von Stuntner [Hilde]; the director is B. Hemer, [Heimer].

[Heimer] The Pilot was originally in two parts. In part I, the grizzled vet is the mentor for the rookie, and is unexpectedly killed in a surprise twist that put our audience on notice: no character is safe! We are throwing out the television character trope book for this one. Adjust tension accordingly. Part II was all about the rookie showing he did, in fact, learn from the mentor and will be able to solve crimes on his own. In fact, his first one will be to avenge his fallen comrade.

[Hilde] I know. This is also great for salary negotiations.

Rookie: “Doc, have you found the cause of death yet?”
Coroner: “I’m a doctor, not a farmer, Rookie. Maybe try looking for a rogue chef?”

Rookie, ready to launch into a tirade of complaints, but pauses instead, thinks carefully, and comes to a conclusion.

[Heimer] We need to punch this up, show these two have a relationship and that there is more to our coroner besides his uncaring demeanor.
[Hilde] Agreed.

From inside the restaurant, we see a middle-aged African-American Marmot setting tables. She has a thick Cajun accent.

Chef: “We be closed, constable. Dinner Seating not for an hour.”
Rookie: “Not here for the food. I’m trying to find a killer. Where is the chef?”
Chef: “You be lookin’ at her. What can I do fer yourself?”
Rookie: “What’s your name?”
Chef: “I be Sister Chabert, culinary expert in veg of size and practitioner of de mystical arts of Hoodoo.”
Rookie: “Veg of size, huh? How does one specialize in that?”
Chef: “I volunteered to clear mine fields in Cambodia back in de ‘90s, so orphans and homeless childs could safely venture into de jungle to fight chimpanzees for der food. After losing me legs, de village witchdoctor nursed me back to health and taught me de ways of Hoodoo. And cooking. Since I couldn’t catch de massive flora meself, I specialized in de preparation and secret spices necessary to bring out der wondrous flavors.”
Rookie: “You married, Sister Chabert?”
Chef: “I be not. I be pansexual, detective, and undecided in my proclivities.”
Rookie: “I see. So if you don’t procure the vegetables, who does?”
Chef: “That’d be me sou-chef, Milton Thompson.”
Rookie: “Milton Thompson? That sounds… mundane.”
Chef: “Aye, he be albino squirrel. Adept at de mechanical devices, and skilled in de art of hunting down and delivering vegetables of unusual size.”
Rookie: “Mechanical devices? Like bombs and guns?”
Chef: “Not really. Dese legs you been admiring without permission? Dey be artificial constructs made from tungsten alloy.”

Rookie: “Sorry about that. I studied mechanical engineering in high school. I was only admiring the craftsmanship. Is Milton Catholic by any chance? Maybe Baptist?”
Chef: “Mormon, far as I know.”
Rookie: “Mormon. Those guys are always trouble. Married?”
Chef: “Girlfriend. Several girlfriends, in fact. I believe he be a bit of a Romeo.  Not dat it matters, aye?”
Rookie: “Trust me, for him it matters. When are you expecting him back?”
Milton the Albino Squirrel: “Expecting who back?”

Rookie: “Hold it right there! Place your hilarious yet adorable fingers on your head! I’m arresting you for murder!”
MTAS [smirking]: “You seem to have a problem, officer. I’m the best large veg hunter in Dewberry Woods. I know 67 ways to pry them up, out, or off.”
Rookie: “I’m an officer of the law, squirrel!”
MTAS: “You are also a giant mushroom.”

Scene III
Rookie bursts out back door. Chef close behind. We see Milton the Albino Squirrel entering the forest on a hover motorcyle.

Rookie: “What are the odds of *that* just floating around out here?”
Chef: “I tell you, he be a practitioner of the arts mechanica. Dat be a hovercycle prototype.”

Camera swings around to show a second hovercyle.

Rookie: “There’s another one. A second prototype?”
Chef: “No, dat just be fortuitous coincidence.”

Scene IV
Mushroom and Squirrel chase each other through the forest on hovercycles. Their engines in perfect syncopation with each other as they dramatically dash over, under, and through the branches.

[Hilde] Hasn’t this been done already?
[Heimer] A long time ago. Nobody even remembers the movie it was in. Ours will be better anyway, there aren’t any stupid teddy bears to run over.
[Hilde] Yeah, I don’t know. That movie was more popular than you think…
[Heimer] I’m telling you, the whole scene was ret-conned away with the latest installment. It’s like it never existed. Besides, nobody gives Michael Bay this kind of crap when he does the same thing. We’ll call it an homage.
[Hilde] I’ll check with Special Effects and see what’s left of the budget. Do you know how much it cost to make that rabbit look real?

Scene V
[Heimer] Yeah, we need something here. I’m thinking it’ll be the Sergeant and Rookie devising an interrogation strategy. We’ll interrupt it with some kind of family thing, so everyone realizes the Sergeant isn’t just the gruff, all-business cardboard character we’ve seen up to this point.

Scene VI
[Heimer] Heartbreaking, somehow, as Milton the Albino Squirrel confesses his crime, callously taking a life in order to deliver 1000 ketchup packets at a cost savings of 12 cents per unit.

[Heimer] Final scene is still TBD. I’m thinking its the funeral for our veteran detective. Touching, heartwarming, yet hopeful. Think we can get Hilary Clinton to be the preacher giving last rites?
[Hilde] Not a chance, she’ll be indicted by the time we can put the filming on the schedule. I’ll put feelers out to Michelle Obama, though. 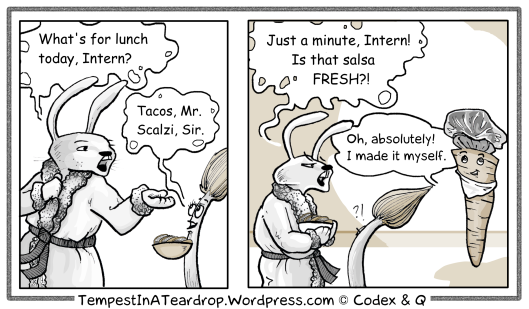