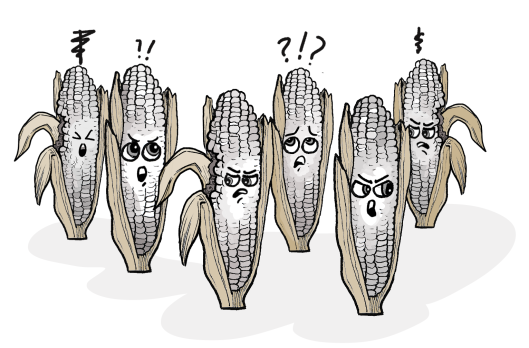 The Iowa corncus results are in: Cruz wins by an ear!

Corncus-goers turned out in record-breaking numbers despite the fact that they were required to vote. Ted Cruz took first place with 28% of participants, followed closely by Donald Trump (24%) and Marco Rubio (23%). Everybody else will either drop out or be sacrificed at the altar of Hillary Clinton, who needs a little more oomph if she is to vanquish Bernie Sanders.

“What can I say,” said Lena Dunham, spokeswoman for the Hillary campaign. “The economy is even horrible in Hell. Demonic help is at bargain-basement prices. They’ll even take the soul of Chris Christie for payment.”

The race for the Democrat Party nominee ended in a dead heat, with 50% of the vote going to Hillary, 50% going to Bernie Sanders, and -4% going to Martin O’Malley. Vote totals were provided by Microsoft.

As meaningless as the vote totals are, the real political battle is taking place between the cable news networks.

The Republican field ran a veritable rainbow of hispanics, blacks, whites, women, and Jeb! Bush. MSNBC wants everyone to know how racist that is. The Democrats, running old white people, is the *real* party of multiculturalism. Because they said so, that’s why!

CNN is really quite sure that Hillary won. Don’t let the actual vote totals sway you. Hillary, currently trailing in the New Hampshire polls by as many as 30 points, will eke out a victory. She will “exceed expectations”, lose by only 10, and thus ride her momentum into South Carolina and Nevada a week later. The Hillary campaign is the Amazon of retail politics, and have you see their stock price?

Fox news is quick to remind everyone that Donald Trump is the Candidate of Evil. Bill Sammon, Fox News Washington managing editor and network vice president, is urging everyone to give Marco Rubio a second look, especially after the softball questions he answered in the presidential “debate” hosted by Fox News just last week.

Brooke Sammon, his daughter, works as a press secretary for the Rubio campaign. This is just one of those happy coincidences that nobody in any of the mainstream media is talking about because it turns out that politician/reporter connections are rampant throughout the beltway. Yay, America.

On behalf of Americans everywhere: Thank you, Iowans. You sacrificed an episode of Chicago Fire to do your patriotic duty. It was truly worthy and brave, and come election night in November, we’ll make sure to blame you first.