Hillary woke up after a long night of campaigning. She was running for President and scanned the newspaper headlines every morning. The FBI was continuing to investigate her for violating federal law in the way her private server handled top-secret information. Ugh.

Hillary could tell it was going to be a bad week.

Hillary had won the Iowa caucuses and was one step closer to becoming President, but stories kept appearing about “voting irregularities.” A single voter showed up in one precinct. They had voted for Bernie, her hated rival, but Hillary won the delegate. Several precincts had discovered “missing” ballots, and the leaders of the party allocated the delegates via coin flip. Hillary won all six.

Hillary could not figure out what all the ruckus was about. “It’s politics as usual!” she proclaimed to her long-time assistant, Huma. “It will pass,” said Huma. “Remember to mention at the press conference that voter ID is not required in New Hampshire.” Hillary hated press conferences. Blech.

Hillary could tell it was going to be a very bad week.

Hillary’s husband, Bill, was giving a campaign speech in New Hampshire. His rhetorical shine had been fading lately. “Sometimes when I am on a stage like this, I wish that we weren’t married, then I could say what I really think,” Bill told the crowd. Awkward!

Hillary’s relationship with her husband was very important to her. Spouses cannot be compelled to testify against one another. I have to find a better way to motivate him, Hillary thought, if I am going to be President.

Hillary could tell it was shaping up to be a no good, very bad week.

“You have an honesty gap,” Lena said.
“What do you mean?” asked Hillary.
“It means nobody believes the words that exit your mouth.”
“Does that matter? Surely they will vote for me because I am a woman!”
“They don’t believe that either,” Lena confessed.

Hillary was flummoxed. “What can I do?” she asked.

“Well, I took all my clothes off and appeared in a show called Girls on HBO. That earned me respectability and legitimacy as a feminist advocate. I suggest you do the upcoming debate with your hated rival, Bernie, in the buff. Everyone will see that you are, in fact, a woman. And they will surely vote for you then!”

So she did the debate in the buff. As it turned out, nobody was watching. Rats!

This was definitely a horrible, no good, very bad week.

Hillary took a break from New Hampshire and visited Flint, Michigan. She berated government officials about the water crisis. She Tweeted “Would it have happened if they were rich and white instead of poor and black?”

Guess whose Diversity Officer forgot to monitor Twitter? Steve M called her a crybaby and Tweeted, “You do know every government official there is a democrat, right?”

Hillary told everybody, “I’m having a horrible, no good, very bad week.” No-one even answered.

Comfort food was called for. Hillary dragged Huma to the local Dunkin Donuts. 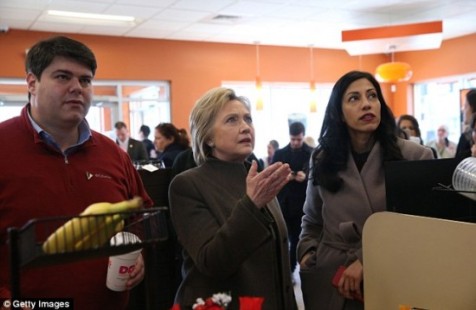 “What can we order here?” asked Hillary.
“Donuts or coffee,” replied Huma.
“I don’t see the price for votes…”
“Those are only at the stores in Washington DC.”

It was officially a terrible, horrible, no good, very bad week.

Hillary raced back to New Hampshire and made her pitch to college students. Kids loved her! Surely she would get traction among her fellow leftists on campus. Alas, they did not appreciate their safe space being violated.

“Delegates are the only voters that really matter,” explained Huma. They were on a private jumbo jet to North Carolina. Hillary couldn’t sleep. She kept thinking that if she won the nomination but didn’t get at least 40% of the popular vote, people wouldn’t love her or respect her when she became Queen.

She was miserable, but at last drifted off to dreamland where her hated rival, Bernie, was a decrepit hippy socialist and she wore a spectacular crown of jewels and the finest robes that lobbyists could buy. She sipped her tea and used a worn, stained copy of the constitution as a napkin.

Huma woke her as the plane landed. Hillary scanned the newspaper headlines.

It had been an awful, humiliating, horrible, no good, very bad week.

Hillary had a feeling the next week would be just as bad.

Even if she campaigned in Australia.

6 thoughts on “Hillary and the Bad Week”