We’ve returned from vacation and are currently working through the post-vacation recovery process. You’ve all been there.

After a couple thousand miles on the best roads the second world has to offer, I can definitely say that America needs driving lessons. Some drivers find the risk of driving in the blind spot of an eighteen-wheeler on a two-lane highway acceptable. It probably is compared with tail-gating the thing and pulling in front of a person at the last minute before they pass both vehicles.

I can feel a post entitled America’s Driving Sins being written deep in the back of my humor lobe now.

It will have to wait, because…

To top off the week we attended the ECCC in Seattle over the weekend. This was the convention that featured the problematic Sunday convention badge. I’ll have a full report on Thursday.

I’ll write about it on Thursday. It will in no way be a full report. Or fair. Or balanced. It will cover the Cosplay is Not Consent signs all over the place, though.

Terri is Doing Fine, But…

We checked on Terri sometime after getting back. I can’t remember when, exactly, because there was a lot of unpacking and sleeping to do first. She seems fine. She is taking her prenatal vitamins despite the fact that they are sexist. In this particular case, we think she has a point. The prenatal vitamins for non-potato men are… just vitamins.

We still need a name for Terri’s daughter! If you’ve somehow missed our contest, you only have three weeks left to enter. We’re working behind the scenes, just in case. I’m partial to ‘Vodka’ because it is foreign and exotic and distilled from the mysterious potato plant. Codex disagrees. Tomorrow I’ll fight for ‘Short Fry’. It’s going to be a long April.

Political Correctness vs The Search for Happiness

While we were away, L. Jagi Lamplighter wrote a fantastic post about why she rejects political correctness, and why everyone else should too. Well worth your time. A big Thank You to Codex for spotting this as I had literally thousands of news stories and emails to delete as rapidly as possible, and otherwise would have found this one next week.

Upon our return from the convention Sunday night, we discovered that a gang of disgruntled Trump supporters had broken into our house and taken out their displeasure on a copy of National Review Codex had lying around for some reason. 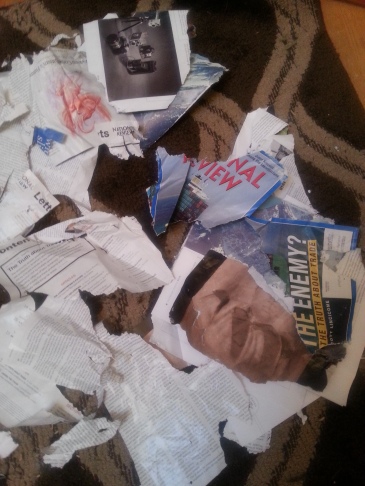 The carnage was like this, but everywhere. It was a metaphor for the 2016 election.

We assume it was Trump supporters. Our witnesses insist it was so.

Innocent bystanders, traumatized by the carnage of out-of-control Trumpettes.

I believe them, at any rate. Codex wasn’t so sure. After a healthy debate, we agreed that 1) it was a copy of National Review; no harm done, and 2) Extra tummy scratches and liver treats were a suitable reward for chasing off the invaders. Because they could not be fully absolved of the destruction, I wasn’t allowed to give them Greenies.

Not that night, at least.