I’ve greatly admired the fame, money, and glamor that folks on YouTube experience on an hourly basis. I’ve even thought about jumping in myself, but lack the animation required for the video business. Perhaps one day that will change. In the meantime, the experience can be simulated thanks to a new game from U-Play Online, called Youtuber’s Life. I normally wait for games like this to go on sale, but Steam got my $15 so I could experience the glamor first-hand and bring an accurate review just in time for the game to go live.

Glyph, our teenage daughter, sat down and played it with me. Codex was drawing across the way, so it was pretty much a family affair.

The first thing to do is create your avatar. You can pick between two models: male and female. This will be a problem for many college-age children, but this is something I really like about the game. It is an excellent tutorial for introducing millenials to the advanced concepts of adulthood.

I chose to be a girl. As a father, I wanted to be a good role model and demonstrate to Glyph the proper way to be a lady. As I explained this, Codex’s eyes rolled around and made squeaky cartoon noises in her head. Glyph wasn’t sure if I was serious or not. Honestly, why would I lie about that?

So we created “Quizzer”. She’s in purple. You start out living with your mother, who is either obsessively cleaning or obsessively barging into your room to scold you. She will wait until you are done with your current activity before interacting with you, which means she looms over you in your sleep. Yep. Do whatever it takes to move out, millenials. Even make YouTube videos.

Making a video isn’t terribly difficult. You can only be a “gamer” at the moment, but there are placeholders for cooking, music, and other sorts of ‘Tube channels. Glyph and I will play again when the “fashion” option comes out. I am no longer a teenage boy, so I know a lot about how teenage girls should dress. It will be a very instructive gaming session, I’m sure.

Before publishing your first video, you need a good YouTube channel name. Glyph was quick to offer suggestions: Games With Grandpa, This Old Spork, False Teeth Films… I cut her off at Wrinkled Reviews. She is clearly terrible at coming up with names. Tempest in a Teardrop Studios it was.

You start off with one awful game on your shelf, which pairs well with your awful equipment and awful skills. Video recording uses “action points,” which you have very few of to start with. These decrease as you fail to eat or sleep. Players quickly learn to get enough sleep and feed themselves before working: valuable lessons for infantilized twenty-somethings.

You collect cards somewhat randomly as you play, like this basic “Intro with logo” card. When recording a video, you can choose a clip to record by selecting it. It takes a certain number of light bulbs (action points) to record each segment, and the goal is to produce the highest point totals in various categories. Cards display the points rewarded in each category, but if you match the clip type with what the game wants you’ll earn bonus points. In the screenshot, you can play a plain clip with the green Scripting category to get the maximum points possible for the segment.

After you’ve recorded your video, you go into another mini-game called “editing”. Each clip has input arrows and output arrows and the better you match them up, the better the “editing” score will be. The higher the point total, the better the video will be received by the YouTube audience. As your skills increase, you get better cards, the ability to record more segments, and many more light bulbs to manage.

Once your ’90s-era PC processes and uploads the video, the reviews roll in and you collect views, subscribers, and cash. Your PC is limited to one task at a time. Rendering and uploading a video can take a day or longer. If you need to use your computer for anything else like ordering games, clothes, peripherals, or chatting up acquaintances, plan ahead. This never changes, even after buying the super-expensive later models.

Glyph didn’t think the reviews were realistic. They have complete spelling and punctuation. I had to agree with her. They don’t include profanity or death-threats. Games have to compromise to model reality, so we were willing to overlook this shortcoming. I’d still like more options to deal with naysayers, however. Adriana, Itzel, and Trinity need to get a visit from the YouTube Assassins Guild.

Once you’ve made enough videos and raised enough cash, you can finally leave home. You share an apartment with your best friend whose purpose is to play your games, borrow your computer, and distract you with parties and movies. You also have to do things like buy your own clothes and food. The game walks you through the steps for using the refrigerator.

You do all your shopping online. The packages are delivered auto-magically via invisible robot drone. For example, you can pick from these poor food choices. Fortunately, you can sponge off mom’s health insurance a few more years.

See, realism. This is the kind of superversive gaming experience that teaches basic life skills to those who need it most: college students. Your refrigerator is not a safe space.

You have to deal with other life choices, too. Like unplanned bills.

The game challenges you to explore your morality. Will you give the free game slipped to you at a conference a good review?

Which side of the culture war will you support? Some game choices will force you to choose sides. What will your in-game mother say? What about your real-life daughter? The only safe choice here is “The Glory of Cookie”, but it is old, expensive, and interest is rapidly waning. Will you cave and get “Blazing STD” instead? How hard will you laugh at the other titles?

And… what the heck? 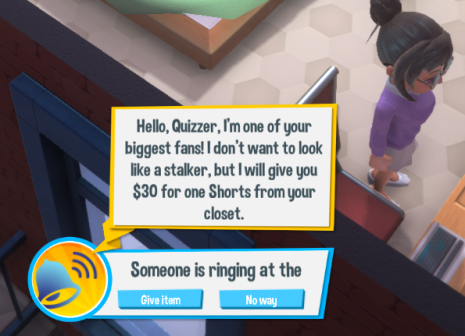 Dude, you passed stalker when you sneaked into my apartment and rifled through my wardrobe. I guess the glamorous life that YouTubers experience has a dark side we rarely see.

Apparently the city you live in is located in a dust bowl, because your brand-new computer is constantly breaking down. The bills add up. Repairman butt is an issue.

You can space out your computer purchases only so long. If your PC looks like this one, it’s expensive news. No further repairs are possible.

Now we know why Mom was constantly dusting! It is amazing how smart our parents get after we move away from them.

Once she had over 50k subscribers, Quizzer started to get invited to important conferences. Her recent video had only made $47.16. I knew she needed help. It was time to find a boyfriend, whom she could later marry and exploit for his superior video-making skills. Not that I told Glyph any of that. I’m usually not a good guy in my video gaming adventures. Or in this case, a good gal. 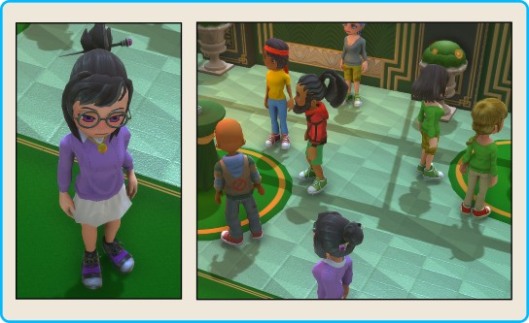 I asked Glyph if this was a good boyfriend-finding outfit. I also asked which potential boyfriend we should approach.

“This is weird,” she told me.
“Well I can hardly ask your mother to help find us a boyfriend!” I retorted, “That would be weird.”
“And painful,” Codex added. She wasn’t being sarcastic.

I took a good luck at the guy in the red jacket. I liked the dreadlocks and beard. Bit of a sloppy dresser, though. I hoped to fix that later. Game Note: You can’t fix that later. What they wear is what you marry. I checked out his stats.

Jackpot! He’s a 10! His name is ‘Cannon’? That, good readers, is what you call game. He would be mine. I planned my approach, although my options were limited.

Cannon and I chatted until we became acquaintances. I got his cell phone number. In game terms it meant I could invite him to other events, like parties and movies. Our relationship could develop naturally. Then I saw him chatting up Mckinley, here.

Nuh-uh, wench. There is a Google car with your name on it, and I will give up valuable video-processing time to hack it and arrange an unfortunate accident. While ranting, like I imagine schoolgirls do about their future boyfriends, Cannon walked right up to some other dude and gave him a huge hug!

What. The Actual. Zuck. I picked the only gay YouTuber? I’m terrible at picking boyfriends. They got along famously. Spiky-hair guy doubled over with laughter.

Yeah, dude, it was a Tempest in a Teardrop cartoon. It wasn’t that funny. I’m afraid neither Mckinley nor I would be landing Cannon any time soon.

Overall, we liked the game, but numerous pre-release bugs kept us from experiencing the whole thing. We’ve shown perhaps 20% of the game play, although it boils down to the same record-edit-release cycle. Later on you can hire other video makers, purchase extra PCs, and run a video-making sweatshop (called a network) of your own. Sweet.

U-Play Online released a beta candidate yesterday and claims it is good enough for the upcoming final release in a few days. Codex would not allow Glyph to take a “sick day” from school despite the fact that she would be playing hooky with a semi-responsible adult. Codex is the conservative, less fun, parent.

Youtubers Life is probably a game to keep an eye on, catch on sale, and wait for future expansions. It has good bones and as much drama as you want to bring to it. Next time, I’ll ask Codex to play and we can make a Cannon-like guy of our own. Maybe they will introduce mushrooms you can turn into girl friends.