Today, we have a special guest writer playing and reviewing Tropico 5, a city-building political simulation computer game in which the player is the leader of a banana republic. Hillary and her personal assistant, Huma, sat down to walk us through their experience playing the game.

Hello. I’m Hillary. As you know, I’m running for President of the United States of America. Although eminently over-qualified, a little more practice can’t hurt. I was hesitant to take time out of my busy schedule to write this, but Quizzer pointed out the inroads I could make with the oft-overlooked cutlery vote. After the tremendously good news I received last week, I finally said, “What the heck! It isn’t like anyone will read it anyway!”

The first thing you have to do when starting a new game of Tropico 5 is to choose your dynasty name and your appearance. Dynasty: Clinton. Appearance: Hmmm... On one hand, it doesn’t matter. The only place your snazzy dictatorial look can be seen is the screen where you pick it out. It appears nowhere else in the game. I sought advice from my trusty assistant, Huma.

“What about this one?” I asked. “It really captures my inner persona.”

“This is the look you want to go with. Foreign leaders can appreciate everything it says about you with a quick glance. You will raise hundreds of millions of dollars for your campaign.”

“It is for you,” Huma replied.

Huma and I noticed that fashion accessory items include clown noses, clown hair, and a pacifier. “Huma, why on earth would anyone pick those?” I asked.

“Other leaders might want to play the game. Obama and Bill need snazzy dictatorial outfits, too.”

Huma is wise. It is just one of her many charming qualities. One of the four available faces is what I refer to as Centenarian Sour Lips. “What about the shriveled old woman? Who would want that?”

The game starts in the Colonial era. You are the governor of an island and serve at the behest of a king. I did not like this. It brought back too many painful memories. Still, it had its charms. We started the first scenario, and right away I noticed an improvement I’m going to make when I become president. 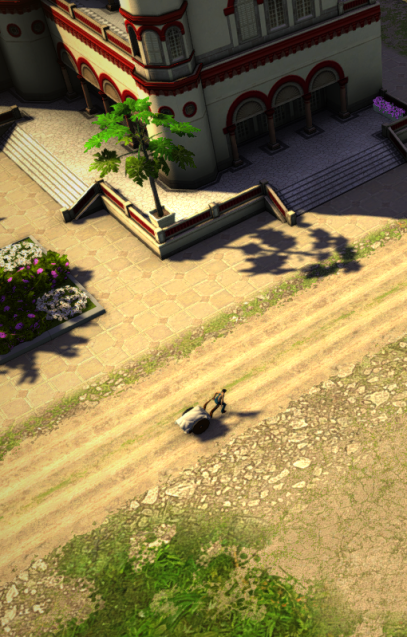 “Look, Huma. The island has a green transportation system!”

We began to rule and build and profit. Kalypso has done a really good job with the building options and graphics. Players can build plantations. The people erect little hovels nearby made of whatever junk they can find lying about, assuming you don’t provide houses for them. 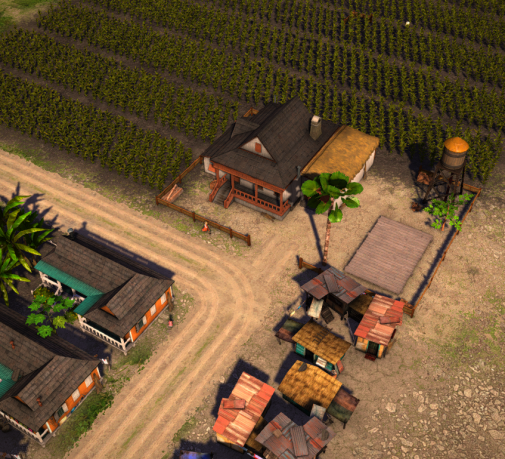 I like to think these peasants raided the remains of Trump Towers. Socialism might not yet work anywhere else, but it works fantastically here!

Plantations are excellent buildings because they yield high profit margins and a place to keep people until they are needed for elections. This is a stunningly realistic reflection of the real world! Our education system is preparing young Millennials for these shovel-ready jobs. 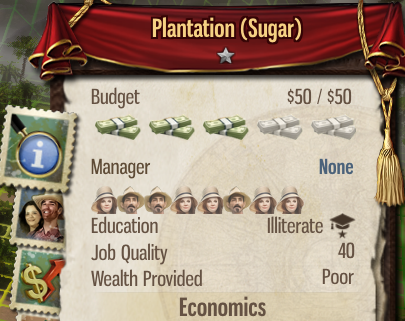 As a leader of a banana republic, you are forced to make difficult choices for your island paradise. Lord Oaksworth (below) is offering to either: give your people $5,000; extend your right to rule by one year; import more colonists to exploit in your industries; or to provide a robust personal campaign donation.

Fortunately, I am very, very experienced at these kinds of decisions. Much more experienced than Donald Trump.

The game gives you advisors to help drive your decisions. I was extremely impressed with the young revolutionary, Evita Vasquez.

“Look Huma,” I said, “She is like a younger, hipper, more Latina version of you!”

Lackeys. Am I right?

In the screenshot, Evita wants me to build a library, and in exchange she’ll do some favors for me. I suppose a library is okay so long as they burn books like The Art of the Deal.

You can also acquire heirs to serve in your family dynasty. They can be used in key locations to improve various aspects of buildings and industries. “It’s called nepotism, Huma.”

“I’m well aware of that, Hillary. Was it not I that arranged the Chelsea/NBC position?”

“Of course you did; but it was Chelsea who did none of the work, wasn’t it, Huma?”

“Do I have to remind you that I know where the emails are buried, Hillary?”

A secret society (The Patriarchy) rules the world, but in Tropico 5 they are called The Order. The Order promises to help grow your personal wealth and power. Your island nation might benefit from this. I almost ragequit after reading their introductory invitation, though. What is not offensive about this?

What they want is often unclear. “Huma, what does he mean by earn in these instructions?”

“That makes sense. Words mean things. The writers should really do a better job.”

The little touches are a nice improvement to Tropico 4. For example, the church has a little miniature graveyard. You never know when a graveyard might come in handy. 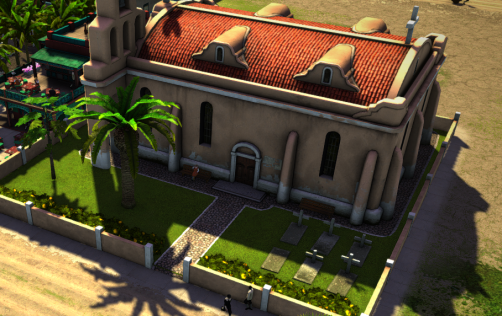 The “Share the Weight of the Crown” plan. Sheer genius! That will totally be a law when I’m President.

The variety of methods for making profits will make you feel like you are reliving your youth.

Huma and I noticed that they have added Dungeons and Inquisition buildings! The Dungeon looks fantastic! 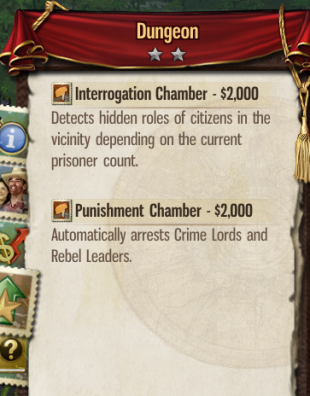 With extra research, you can add additional capabilities. I don’t want to give too much away, but both of these extras are well worth the cost.

The Inquisition building is equally useful, but I’m going to leave you with some reason to check out the game.

Every time we unlocked new technology and buildings, the wisdom of the developers impressed me. Here, Evita explains the power of the press. 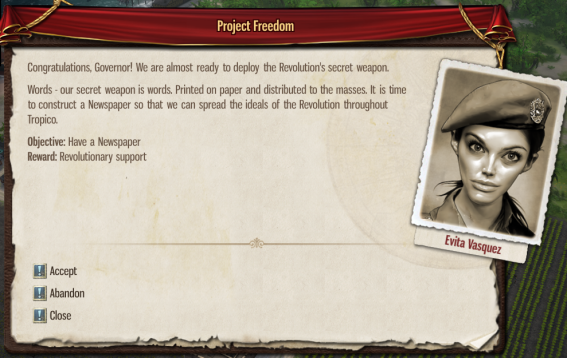 Eventually, you can manipulate the people into revolting against the king and electing you their benevolent overlord. At that point, you have to worry about winning pesky elections. Luckily, your support is easy to gauge.

“What does this thumbs up percentage mean, Huma?”

“It means only 46% of your island residents are sexist, Hillary.”

With a Dungeon and Punishment Chamber available, that percentage will soon drop precipitously. Just like when I’m elected President.

As the game progresses, the choices you must make as the leader of a banana republic get harder. “Oh, Evita, you give me tough choices indeed…”

Overall, Tropico 5 is a decent introduction to the Tropico series but it has been greatly simplified compared to previous versions. It feels very easy and uncomplicated to manage by comparison. If you’ve never played before, the graphics and story will keep you entertained.

If you are already familiar with the Tropico series, stick with Tropico 4. That version feels far more satisfying, especially if you enjoy more complex city-building gameplay.

Thank you, Hillary, for your leadership insights and thoughts on Tropico 5.