Something unnatural is going on in Australia. Vampiric mystery dates, naked restaurants, and tree-chanting protestors are merely symptoms of a far more nefarious scheme. The latest weirdness is as disturbing as it is cute. Read on, curious reader, because I was either going to write about another disturbing trend in Oz, or the century-sized naked Trump protest rally in Cleveland.

I couldn’t show pictures of that, so here we are.

At first glance, home invasions are rarely what they seem. This video doesn’t feature a stuffed animal or a wayward pet or Marco Rubio dressed for his RNC floor speech. Check it out:

That’s a genuine wild Koala Bear. The cuteness factor blinded me at first, too, until I did a little more research. Thank you, internet.

In a separate, totally-unrelated wildlife-invasion incident two flat-dwellers arrived home one day to find this little guy had moved in and made himself right at home. Adorable? Certainly. Who wouldn’t think a Koala crawling onto a leather couch, cuddling up with a blanket, and catching up on Offspring reruns isn’t charming? Especially if the couch belongs to somebody else. 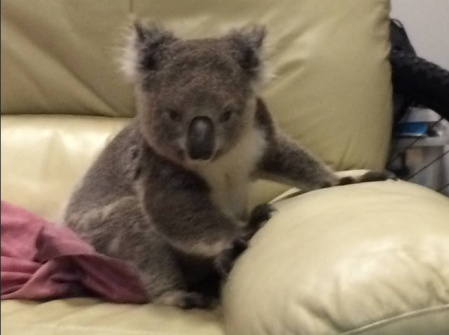 Look again, carefully, and note the details. See his ready-to-pounce posture? His long, sharp, extended claws? The “you’ve seen too much and now you will be disemboweled” glint in his eyes? The homeowners were terrified, and called in specialists to handle the situation. Meanwhile, it was a tense standoff because they couldn’t leave their own flat. One wrong move and the lounge becomes expensive leather pom-pom material.

He’d do it too. Koala bears are the curmudgeons of the Australian outback.

Koala home invasions have been documented as early as 2013. Watch as this one just waltzes in like he owns the place.

Nobody is asking the big questions. How do the cuddly marsupials gain entry? Why do they instinctively understand human technology? Climbing burlesque poles and napping on couches is one thing, but using the remote to catch their favorite show on the telly? These aren’t isolated instances. Specialists are available to help remove the critters so traumatized homeowners can get back to their lives. Specialists. You can’t become specialized at something you only do once or twice.

According to the Australian tourism bureau the Koala is a gentle, eucalyptus leaf-eating herbivore. It is the symbol of their country, and appears on everything from money to jet airliners. They have a lot at stake, because it is far cheaper to convince you that the so-called bears are the one creature native to their island nation that isn’t trying to kill you, than it is to repaint virtually everything.

Eucalyptus leaves contain the nutritional value of a political speech. Those claws aren’t for climbing trees. Their killer-look is reminiscent of Chucky movies. In the wild, they are only at the bottom of the food chain because it’s Australia. In my home state of Washington they’d only lose out to mountain lions, real bears, and bigfoot.

Something weird is going on; and not just Australia-weird, either. We’re clearly entering California-weird territory. I’ve spent the better part of a day pondering the possibilities. If you wish to make sleep a stranger, read on. One of these hair-raising scenarios has to be the explanation.

Government Trained Operatives
Governments have experimented for decades trying to make animals do their dirty work. Dogs, monkeys, and dolphins are all examples of man’s natural helpers in the animal kingdom being forced to find undersea mines, fly drones into outer space, and poke cold noses into the personal areas of terrorists. Is it such a stretch to imagine the Australian Security Intelligence Organization finally noticing Koala Bears?

Their claws are perfect for picking locks. Their pouches can easily conceal contraband or smuggle items deemed vital to the national interest away from nefarious evildoers. Their gentle nature and cuteness are natural distractions. Nobody would suspect that a trained Koala operative could invade their home and spy for the government. Koala Bears are perfect cartoon government spies: The only thing they lack are adorable fedoras.

Field trials are clearly ongoing and successful. They have even been caught on video a couple of times, but everybody gets hooked on the cute and doesn’t think to ask the troubling questions.

The Alien Connection
Some secret alien organization is running a psy-op on unsuspecting people down under. Test conditions involve the complete improbability of a wild creature using human devices to do seemingly-human things and observe the reaction of the test subjects. This preliminary work is a warm-up for when aliens show up in our homes. They are conducting the tests in Australia because America’s gun laws are problematic.

I suspect the Greys. This seems like the sort of thing they’d move on to after all the cow mutilation experiments.

Natural Habitat Destroyed
In conducting research for this post, I read a lot of headlines about the behavior of Koala’s in the wild. Apparently they “adopt” a tree when they are very young, and spend their entire lives living in concert with their tree. Should it be cut down or a shopping mall spontaneously appear where their tree used to be, the Koala’s get very confused and depressed. Their thinking process doesn’t involve finding a new tree.

There is a lesson in there somewhere, but I’m going with “Scientists are worthless because the Koala thought process is a natural mystery that requires an explanation which scientists simply can’t provide, but that doesn’t keep them from making something up anyway.”

A few clever Koala Bears have finally figured out they have to adapt to man if they wish to survive. Naturally, that involves home invasions and finding something special to adopt. I have a similar relationship with my comfy leather sofa.

Conclusion
I don’t know why Koala’s are invading people’s homes and using their burlesque poles. Nobody does. But I do know that it would be very, very bad if the cuddly marsupials are allowed to immigrate to the United States. All they’d have to do is adopt a random home and every three-letter government agency would fill out the paperwork so they could legally own the residence. Let’s just hope the “alien” theory is the real explanation.