No Mans Sky, The Spork Speaks

I admit it. I caved.

The only thing I knew about No Man’s Sky, the new space exploration/survival/action game from Hello Games, was that it was pre-selling in the number one place on Steam for quite some time, despite its hefty $60 price tag. It also generated a solar-system-sized bucket of controversy. Now,  I’m an “explorer” player-type and the best space sim I’ve played was X3: Terran Conflict. Could No Man’s Sky measure up?

So, yeah: I opened the wallet for this one. Codex & Glyph joined me as we formed our own Lost in Space clan and tried to answer the great question of our time: why does the internet hate this game so darn much?

There will probably be spoilers. Read accordingly.

You start out in a crashed ship. The escape pod asks you one question: do you want to explore freely, or follow the “Atlas Path” to the center of the universe? I blindly picked the Atlas path; there was no explanation of what the in-game difference was. With that one, single choice, the tutorial was finished. This game doesn’t hold your hand, or hand you stuff for that matter. If it did, you’d just have to delete it from your inventory anyway.

The incredibly valuable suit inventory upgrade pod. Worth every Unit (The in-game currency)

At it’s heart, No Man’s Sky is an exploration game. The survival aspect is minor. Feed your shield. Feed your life support. Really hostile planets will eat your shield faster, so you either compensate or find a new planet. New planets are easy to find. Good planets are a little tougher, and once you find one you tend to stay there a while. I was on my home planet for a good 8 hours. You can add enhancements to your suit that will make survival less annoying, provided you drop enough stuff to make room for them. The worst planet I’ve found would kill me in about 30 seconds. Curse you, Burning Dust Atmosphere World, with your tantalizing ultra-rare Radnox crystals just lying about in the bones of greedy explorers trying to pick them up.

The Arctic Planet. You’ll freeze to death in about 90 seconds. Fun!

Upgrading your ship is of paramount importance. Each ship slot holds twice the amount of materials as a slot on your suit. If you aren’t sorting, shuffling, transferring, and dropping things on the ground, you’re probably playing Tropico 5. Ships are relatively easy to buy if you can generate enough cash. Whenever an NPC lands, you can talk to him, view his ship specs, and press the buy button. I don’t know what happens to these NPCs once they are marooned. I suspect they are happy about the deal though, because their ships cost a fortune. Even if you leave them stranded on a Death Planet.

Thankfully, some NPCs manage to crash their ships dirt-side. You can find these ships. You can claim them. They all need repairs, and generally only come with one more inventory slot than your current ship. This means you have to sort through your inventory, destroying things you’d really rather keep, so you can make room to craft the items you’ll need to repair the ship.

I swear it was like this when I found it! Since it has 31 cargo space, and my current ship only has 30, it will soon be mine…

The game documents the solar systems, planets, locations, and species of plants and animals you discover. In theory, you can re-name all of these to whatever you like. If another player should stumble across your discoveries they’ll see your name in-game and the meat-space date that you found them. For example, future players will find Quizzer’s World and Quizzer’s Frozen Eye. Have fun with those, guys; they are decent places to make Units.

There are five major kinds of aliens that you interact with in No Man’s Sky. The Vy’keen, Gek, and Korvax are run-of-the-mill game-story aliens. You don’t know their language, so they speak in gibberish and interactions can be a bit of a problem. Obelisks located all over each planet will teach you words. The more of these you find, the less garbled the NPC speech will be.

Not that they have anything interesting to say.

I’ve learned some words for a fourth kind of alien: the Atlas. I’ve yet to meet one, though.

The fifth alien type is the Sentinels. These flying robots patrol each planet and repair any damage (respawning harvested nodes) caused by storms, meteors, or explorers who take generous scientific samples of the local flora, fauna, and minerals. They also protect secure installations. On some planets they are fairly lax in their duties. On others, they have adapted a kill-on-sight policy.

Frankly, the Sentinels are the most interesting aliens you’ll interact with.

Make no mistake, the Sentinels might seem like good guys but they are not. They will take the sky from you. On the plus side, they deliver Titanium and Neutrino Modules, provided you tip them with enough plutonium-charged ammo when they show up. Think of them as the Amazon delivery drones of the No Man’s Sky universe.

A key piece of equipment is your multi-tool. This is a mining laser, a projectile gun, a grenade launcher, and a scanner, in one convenient hand-held unit. It also has inventory space, but unlike your suit and ship the slots can only hold enhancements. You can modify your multi-tool to harvest materials more efficiently or to scan greater distances. I modified mine with homing ammunition and upgraded the bullets so they inflict Vy’keen-like destruction on my foes. Or whatever I happen to be aiming at. It dissolves security doors in about five seconds flat, which means I am safely inside before the security drones are even notified. It has 24 slots. 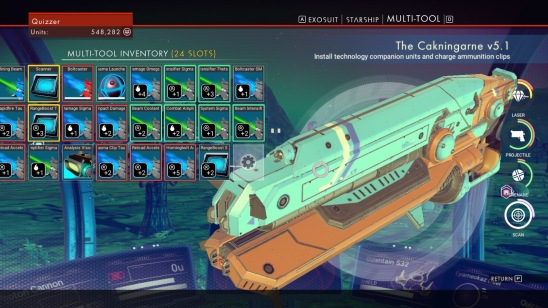 Proof. If *you* have a bigger multi-tool, can you tell me where you got it? Cause I haven’t found a 25 slotter yet.

This is a big deal. When arguing on the internet about the qualities of No Man’s Sky the player with the biggest multi-tool wins. Newbs start out with a puny five slots. Did I mention most of Friday night is a blur, too?

Space is the weakest part of the game. Frankly, it is boring. Ship combat is tedious because this isn’t a flight simulator game. There is no strafing or rolling or flak cannons or homing missiles. In fact, turning your ship to shoot enemies slows you down. Yes, you slow down in 100%, grade-A, friction-free, outer space. Fortunately, death isn’t that serious. You’ll respawn at the local space station where you can quickly fly out to your grave marker and retrieve all of the items that were left there.

The only reason I know that is because I read it on the internet… five times. 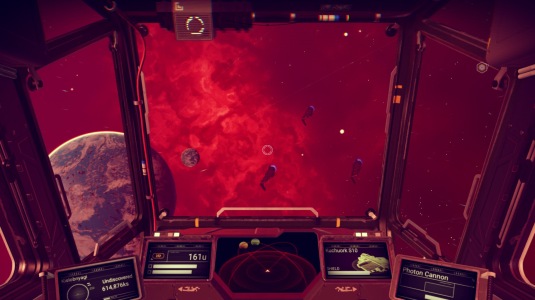 Flying in planetary atmospheres is troublesome as well. Do you remember the driving ride at Disneyland when you were a kid? It was so exciting! You could use the brake and gas pedals and steer and everything! Then you realized that none of those things really mattered. You couldn’t speed up or pass or crash. All you could do was watch the submarine at the next ride over submerge, and regret that you didn’t spend 90 minutes in that line. That’s what flying in No Man’s Sky is like.

You’d also think that space-farers with advanced laser technology and warp drives could find a way to map a planet as it was explored. Nope. You do have a helmet light, though, for when you are lost in the vast underplanet tunnel systems. Did you find a beautiful vista, harvesting area, or trade station? Enjoy it while you can! Once you fly out of range, which is surprisingly small, good luck finding it again. There is no way to mark a waypoint for places you’ve discovered or might want to revisit.

No problem, I can hear you thinking, you just use your compass and navigate the old fashioned way with velocity and direction. Except, apparently, the compass has gone the way of the universal translator.

Since you’ve read this far, I’ll provide a useful tip for newbies. Once the game starts and you are safely inside your crashed ship, go to the “sound options” and turn the music volume to zero. It’s horrible wavy electropop from science fiction movies forty years ago. I imagine some ’70s composer only paid Hello Games four or five-thousand dollars so they’d take this “music” off his hands. He probably sleeps better at night knowing he is no longer responsible for it.

For all it’s problems, No Man’s Sky is a fun, relaxing, game. The “procedurally generated” planetary environments, life forms, and space ships make each planet feel very different, despite the harvesting and exploration aspects remaining the same. Their use of language as a puzzle is genius. In future games, I hope players can grind words instead of faction because learning the alien languages in the No Man’s Sky universe is really just a side effect of the exploration. The roving Sentinels actually solve a couple of problems frequently seen in MMOs: AFK farming and regeneration of resources.

This game still falls short. The aliens are boring, the story is being told badly, and most puzzles are trivially easy. It reminds me of Daggerfall, a fantasy RPG that used procedurally-generated dungeons and a build-your-own-spell system that made the game not only feel boring and meaningless, but beatable in about 30 minutes. Daggerfall was the precursor to the very good Elder Scrolls games. No Man’s Sky could become something much better in future versions.

I’d only recommend this if you are super-excited by the thought of just wandering around and looking at the environment. This game does that very, very well. I would wait for the price to drop to $20 or less first, though.

I *swear* it was like this when I found it!