Once again, Christmas is upon us. This seems strange because I swear the last one happened just a couple of weeks ago. What a difference an election year makes, eh? And of course, controversy surrounds the season. Yes: I am referring to the present-wrapping divide from which many families suffer.

This divide is real. From a scientific inquiry conducted by rigorously Duck-duck-go-ing a couple of sites on the internet, it seems to break down by sex. This makes sense. In prehistoric times, men were busy unwrapping mammoths in order to provide for their families. Women were busy wrapping children to keep them alive. Fast-forward 10,000 years and these skills have been encoded genetically into our DNA.

We have experienced this curse first-hand in our cartooning family. Codex has mad gift-covering prowess. She either secretly did an internship at the North Pole and learned the dark art of present-wrapping hoodoo from Santa’s slave laborers, or she inherited the expertise from her ancestors. She swears it is neither, but she cannot explain why Glyph seems to have her skill level. I know Glyph never interned with the Kringles because otherwise she’d still be there. They pay in cookies.

I, on the other hand, have somehow acquired a negative present-wrapping skill level. Codex can confirm this.

Codex: Absolutely true. I look upon Quizzer with wonder when he manages to stick a fork into his face-hole on the first or second try during the Christmas season. At first I was going to blame my mother-in-law but she’ll read this. His ineptness is that of one who bears a curse from the Meisterburger himself.

Not this year, I vowed. You see, I came up with a present for Glyph so clever and so fitting that I didn’t even tell Codex what it was. The only problem was figuring out how to wrap it myself. Costco doesn’t have a gift-wrapping booth. I bided my time until the gals left to run errands, giving me a three-hour window with which to do a perfect wrapping job.

Various problems would have to be overcome. The first was finding a roll of paper large enough to cover the box, which was pretty big. Apparently, wrapping hoodoo involves taking a handkerchief-sized piece of paper and stretching it to cover any random box size. Lacking this skill, I dug to the bottom of the Christmas junk collection until I found a decades-old roll that seemed to have enough left to provide ample coverage. It was covered with ugly Santa drawings.

Much to my surprise, the paper was reversible. These charming snow people were discovered on the opposite side.

The next problem involved a tactical divide-and-conquer strategy of the surface real estate. I determined the correct approach would be to wrap it as two separate halves, and cover the inevitable seam with ribbon. Ribbon is like the decorative molding in woodworking. It largely exists to hide screw-ups. So far so good.

I prepared the work area by removing anything liable to hinder my effort, layed the paper with the box holding it flat, and measured three times to make sure enough could be folded over to cover the end. So far so good, until it came time to make the initial cut. I swear those scissors hate me, and I also swear that it is personal. I am incapable of cutting a straight line. One year, Codex pointed to the convenient grid printed on the back side of some wrapping paper and looked on with amazement as I proceeded to carefully follow the cut line, only to flip the paper over to reveal a vaguely trapezoidal shape that you could only see looking at the business side of the wrap. Fortunately, this problem is overcome by folding the cut edge to hide the mistake.

Next up came the tape. Most wrapping tape is forgiving. If you stick the paper in the wrong place or at the wrong angle, which is not difficult to do with a large present, you can pry it up, make slight adjustments, and stick it back down again. Not this tape. I got the tape they use on the International Space Station, when they want to glue critical modules to each other. When the paper was attached, it was attached. I had to rip around the tape to re-position things to try again.

By the time I had adjusted and fudged and ripped and whatnot, the carefully-measured leftover could no longer cover the end. I did what every man is capable of doing and began to kludge things. See that strip down the middle? That only took me two tries. The first try resulted in a ragged-edge trapezoidal shape which was somehow too narrow to cover the gap at one end. The second try was little better, but at least I could hide the wide end.

I still managed to make it too short. I don’t know how. 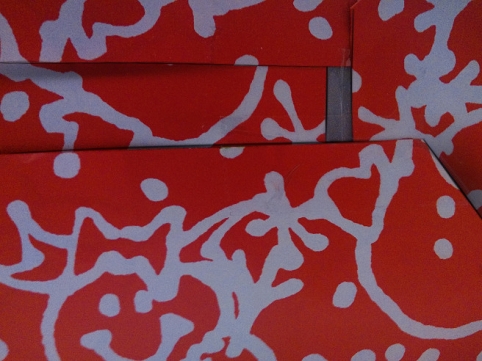 With the first half of the present more-or-less covered, I proceeded on to the second half. I was bound and determined not to make the same mistakes. I measured even more carefully, cut even more carefully, and taped using small pieces only after everything was perfect. Somehow, I didn’t take into account the reverse nature of the paper. Santa ended face-up, and the paper didn’t even form an even seam around the end. 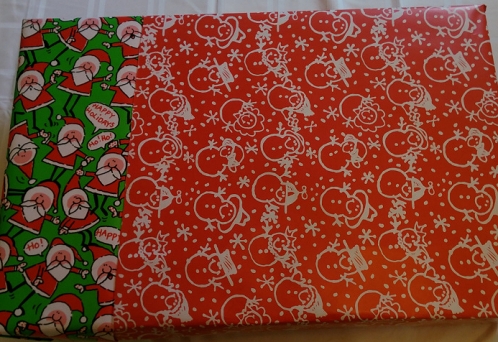 Le sigh. Another year where Glyph will say, “I see Dad wrapped a present again. That’s okay, Dad, it’s the thought that counts.” I know what my thoughts were at this point, and feel confident in saying Glyph really ought to go with the present.

Time for the ribbon. A spectacular ribbon application could still salvage something from this Frankensteinien wrapping monstrosity. 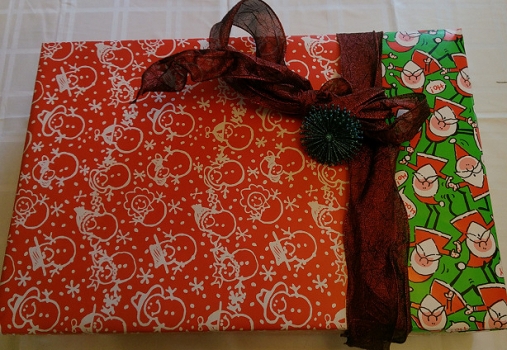 Something didn’t feel quite right. I added a second ribbon.

I had three more presents, this time for Codex. I did my level best. Measuring. RE-measuring. Carefully cutting. Folding. Sticking it the wrong way round. RE-re-measuring a new piece of paper.  Running out of wrapping paper. Finding a bow.

Yeah. The last two turned out much, much better. That was because I had Glyph wrap them.