Stardew Valley is a psychological experiment masquerading as a computer game. There is so much content that I’ll be breaking this review into three parts. This is Part 1: Game Basics.

Your digital life starts in the heart of a cubicle wasteland working for the Joja Corporation. A coworker two cubicles up continues to toil despite his fossilized state, so you know the future isn’t too bright. Thankfully, your grandfather passes and leaves you a dilapidated farm in the village of Pelican Town nestled in the heart of Stardew Valley. You are lucky resident #33.

Your new life will center around building and running a farm. Five skills reflect how you do it. Farming is clearing the ground, planting seeds, watering them every day, harvesting crops when they ripen, and selling them. Buy (or acquire) more seeds and repeat. The townspeople have gifted a package of 15 seeds so you can start your life of vegetative enslavement right away. 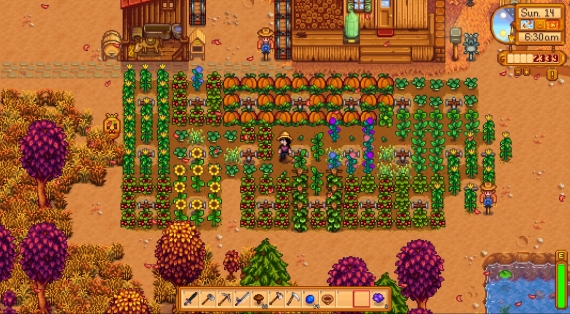 It was so neatly arranged on Autumn 1…

Fishing is a mini-game that involves a lot of swearing as you attempt to capture fish with a bamboo rod you’ll be gifted on your second day. The town apparently played host to the annual Pirate Olympics because the waters are teeming with lost treasure chests. These might include worthless rocks, or diamonds. The only way to find out is to “capture” the chest in addition to the fish.

Mining is breaking rocks with your pick. You can find ores, gems, coal, and geodes. Ores are smelted into bars, and used to craft equipment, like automated sprinklers. By the fifth day of hand-watering all your crops, when the abandoned mine opens, you realize just how badly you want automated sprinklers.

The mines may be abandoned by people, but they are certainly inhabited by a variety of annoyingly dangerous monsters. Marlon, who runs the local Adventurer’s Guild, will give you the Worst Sword Ever with which to defend yourself. You can win membership to the guild by slaying ten slimes. Marlon will then be happy to sell you some real weapons, assuming you don’t get lucky and find one. Whacking monsters is reflected in your Combat skill rating.

This slime has mistakenly assumed I want his hugs. Males have a little antenna. Females don’t.

Seasonal items such as berries will appear all around the game world. Foraging allows you to find more of these, and with better quality. It increases when digging up worms and chopping down trees, too.

Most actions take a little bit of energy, and you’ll run out shockingly fast. It will be replenished each morning, assuming you got to sleep before 1:00am. You can also replenish it by eating things you find during your activities, such as algae or cave carrots or raw fish. This provides motivation to add a kitchen to your house so you can cook more pleasant fare.

Skill levels max out at 10, and with each new level you’ll learn crafting recipes that will make your farming life easier or more efficient. The tools associated with the activity will take less energy to use. At Farming level 1 you’ll be able to craft scarecrows, which protect your crops from thieving crows, and basic fertilizer which gives a chance to gain higher-quality harvests (which increases the selling price). At level five you can specialize the skill in some way. Miners can find one extra ore with each ore vein they break, or have a 50% chance at finding an extra gem when mining gem veins. These further specialize at level 10. If you chose Geologist at level 5, you can choose to make your gems worth 30% more, or find two geodes whenever you’d normally find one. Geodes are the treasure chests of mining.

A sixth major activity, not reflected in your skill levels, is befriending the townspeople. By talking to them and giving them things they like, they will send you items in the mail and secret family recipes. Figuring out who likes what is a game entirely in itself. You can marry any of the twelve single townspeople (six men, six women) if you woo them in the right way. Abigail, for example, loves amethysts, pumpkins, and pufferfish.

Everyone loves me. More importantly, the game is paused while looking at this screen.

As people like you more, you’ll learn more about them through scripted cut scenes. These are very well done, and many involve passing judgement or offering advice. Do you think Penny should have helped a wheelchair-bound George without asking first? Should Caroline stop criticizing Abigail for her fashion choices? Will you encourage [spoiler!] to fling themself over the cliff, or seek help for their problems? 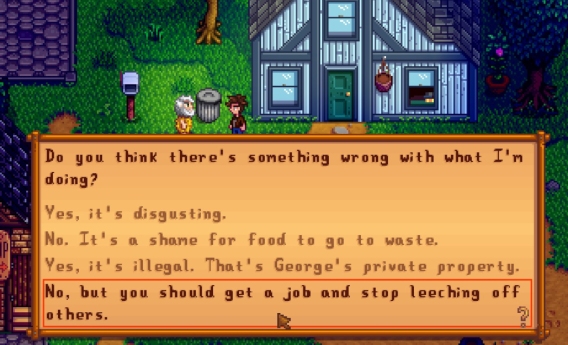 Who knew being a successful farmer meant passing moral judgements?

How will you answer? The decision you make might cost you valuable friendship points!

The game is broken into seasons: Spring, Summer, Autumn, and Winter. Each season has 28 days. The townspeople celebrate two holidays per season, which involve special activities or annual shopping opportunities. Strawberry seeds are only available at the spring Egg Festival. The spooky witch scarecrow and jack-o-lantern decorative item is only available during Spirit’s Eve, in Autumn. The Dance of the Moonlight Jellies is perhaps my favorite, on the 28th of Summer, which involves a wonderful cut scene and beautiful music. A nice touch is that once you’ve unlocked a cut scene you can replay the music on the jukebox at the Stardew Saloon. 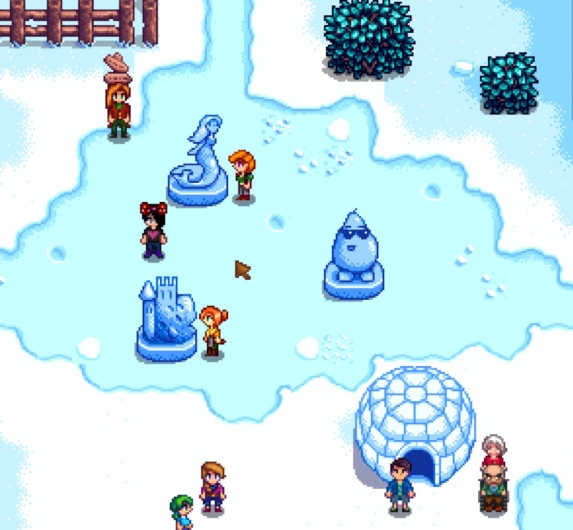 The Winter Festival. Soon you’ll be able to show Willy who the best fisherman really is.

Certain crops can only be grown in certain seasons. This will prove to be problematic because you’ll want to make Pepper Poppers but it won’t be Summer, when you can grow and harvest the primary ingredient, Hot Peppers.

A seventh major activity is building up your farm. You can purchase barns, silos, coops, sheds, wells, and mills. Most raw items can be further processed into artisan goods. Milk can be processed into cheese. Fruits and vegetables can be processed into jams, pickles, and wines. Gems can be produced with the Crystalarium, lightning rods will produce battery packs during rare lightning storms, and even garbage found while fishing can be recycled into valuable items with the Recycling Machine. There are many other products and machines. Nobody plays the game in exactly the same way.

All of this processing takes the proper machine, and each machine takes time to process. For example, smelting copper bars in the furnace takes 30 game minutes, iron bars two hours, and gold bars five hours. Wine will take an entire game week.

Keeping track and physically placing all these machines is a challenging activity, because a game hour lasts about 45 seconds. Each game day takes about 15 minutes to play out. The game will pause while shopping, looking in your inventory, crafting, or social screens, or talking with people. This doesn’t allow you to clear territory or even plan very much. Every player will eventually have to sort out their inventory and this will take them several game days to accomplish. Those last couple of game hours at the end of each day will have you risk the 2:00am hard end-of-day deadline on multiple occasions.

What my farm lacks in organization it more than makes up in Beer.

Laying out your farm with paths, fences, and extras such as tree taps (for three different types of syrup from three different types of tree) takes time and planning. Players can place bee houses, but the bees will produce much more valuable honey if they are placed near flowers. Players can buy fruit trees, but the trees take an entire season to grow and provide fruit in only one season per game year.

Someone even made a browser application for farm planning, which helps immensely by laying out something to work toward. Fortunately, Robin can move all the buildings instantly, provided the area is clear for their new location, except for the stable. Hint: you want the stable near your house, and getting a horse will change your game play.

All of the townsfolk have their own in-game schedules and it changes day-by-day and season-by-season. You’ll find Haley hanging out by the playground quite often (but not always) during Spring, but she’ll be on the beach come Summer. This means shops are not always open. Robin the carpenter will be there every day except Tuesday and festival days. The General Store is closed on Wednesdays, even as Jojomart remains open. Will you cave and buy inferior-quality and more expensive seeds, or eat the day and plant a day later? Will the seeds have enough time to grow? Most die on the first day of a new season.

At it’s heart, Stardew Valley is a sandbox game where the player can make their own goals. Do you want your farm to be a home for lost animals? A brewery? A plantation? A technological paradise with hundreds of machines processing gems, battery packs, and oils of various kinds?

I’d strongly advise new players to skip the extensive wiki and check out only a few episodes of your favorite YouTuber Let’s Plays to see if you want to pick the game up for yourself. If you really screw up and chop down an expensive fruit tree you’d forgot you planted by mistake, then reload the day. Otherwise, live with your choices. I’ve left my pick at home before venturing into the mine (derp). I’ve needed three types of seeds but only bought two (derp). I *know* I have an item in one of a dozen chests (derp). I haven’t managed to win the Egg Hunt (Abigail cheats). I’ve forgotten to fertilize, despite having the fertilizer right on my hot bar (derp), and I’ve given albacore to George when it was really Gus who wanted it (derp). George, by the way, thinks albacore is a terrible gift.

With so much to do and such tight time constraints, this can be a high-stress game. This is where the psychological experiment really begins, and what I’ll be talking about in part two.