The 2016 United States Presidential election is finally, mercifully, nearing it’s conclusion. It’s mostly over, except for the inauguration ceremony and the rage. We at Tempest in a Teardrop are all about the healing, so we are hopeful that social justice-types will take our sincere advice to their coffee-bean-sized hearts.

Not everyone will be given the opportunity to make anti-democracy speeches at award ceremonies filled with self-important people the way Meryl Streep did at the recently-held Golden Globes. In fact, if reports are to be believed, many socialists, communists, and anarchists (can we just call them *ists from now on?) are planning violent confrontations in the near future. They’ve vowed to do whatever it takes to resist democracy as practiced by peasants who refuse to accept the glorious future that awaits them. A Democratic System must be devised that limits voting only to enlightened people, like themselves.

There is a major problem with this kind of thinking: There are not that many folks who truly believe in your crusade. It probably feels like there are, though, so some of you may be tempted to join the rage crowd. However, with Republicans in control of all three branches of government, prison sentences for minor infractions like kidnapping and torturing white people are automatically doubled. Trials are now more like guidelines than actual procedures that should be conducted according to the law. In fact, the Alt Right is probably rounding up innocent protestors on a street near you right this minute.

It’s time to resist President Trump in different ways. Think about what Ghandi would do, or maybe Martin Luther King Jr. Genghis Khan was peaceful and all, but going all Mongol Horde on your fellow citizens is not going to cause the change you are hoping for.

Here are five ways you can Fight the Power in your everyday lives that probably won’t land you before a military tribunal.

Serve it Up
If you work in the trenches of the food service industry, consider using your voice to let your customers know that despite being in occupied territory there is an active resistance. Your customers will thank you by photographing your message and passing it along on social media. Some might even double their usual tip.

Avoid profanity. You don’t want to give your boss an easy excuse to replace your $15-an-hour butt with a kiosk.

Hidden Resistance
Not everyone will be lucky enough to interact directly with the public. Time to get creative. Maybe your message is destined to be blotted out beneath a toasted bun top, but maybe your bravery will inspire the server to place it on the side. Maybe you’ll inspire your coworkers, or perhaps even your boss who’s secretly watching you through a security camera, to join in. If nothing else, you can walk away at the end of your shift knowing you’ve been subversively undermining the Trump administration. 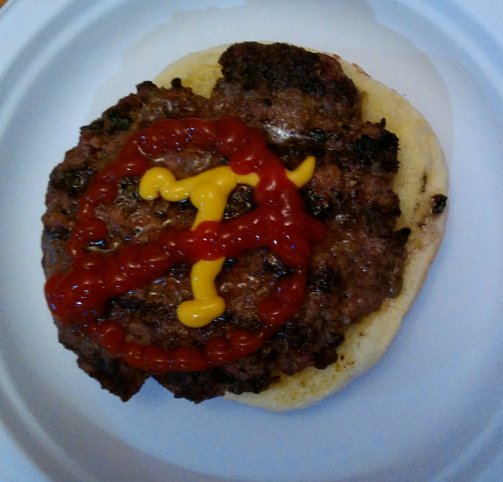 Top This
Pizza toppings are carefully measured but nowhere is it required to distribute them in a particular fashion. Use the drawing skills you developed in university safe spaces and let customers know that when they order from your chain franchise they’ll get a morale-boosting message to go with their meal.

Ask Me About
At least one chain establishment has been very successful inviting their customers to dialog with serving staff on sensitive topics like race issues. It’s time to steal a page from their idea book. If you start the conversation at your location, it will probably inspire managers above you to adopt the policy at locations world-wide. Think of your effort like a plastic trash bag wafted aloft in a dust devil. Who knows? You could be directly responsible for the election of a superstar like Joe Biden in 2020.

Put it in Ink
Our last idea is to immortalize your disillusionment with democracy by getting a tattoo.  We don’t have a picture of this because there are so many directions to run in. Ask your fellow Tumblrina’s for ideas. Our advice is to get it plastered somewhere that people won’t normally see it, such as your butt cheek, or your resume. Don’t give the Alt Right Death Squads an easy excuse to put you in the camps by putting it somewhere obvious, such as your forehead.

When it’s time to march in peace protests, and we have no doubt there will be endless opportunities for these over the next four years, you can reveal it in a creative manner. Superhero outfits can always be devised to strategically show some well-inked skin. Signs are cheap. Show your commitment to the cause in a way that can only be silenced with an orbital sander.