Just in time for Christmas!

If you are anything like us, this is a busy time of year: wrapping presents, drinking eggnog, deforesting the neighbor’s yard, and working out the end-of-year comic schedule.

We dragged our newly-liberated tree into the house last weekend. Sometime between hoisting it over the fence and muscling it onto the front porch I thought, “We’re about to unleash a thousand fir needles all over the house. Maybe I should vacuum up the ones from last year’s tree when we tossed it out in March?”

The cleanup process is pretty straightforward. It begins by accumulating the house flotsam from wherever it has landed and piling it onto Codex’s spot at the dinner table. Honestly, I have no idea where it all comes from. I think our house might sweat junk. It ends up stowed away in the proper place; sooner, if Codex is hungry.

As I was merrily picking up, Glyph was doing homework nearby. I didn’t use a polite word like ‘flotsam’ or ‘junk’ to describe the growing pile of rubbish any hoarder would be proud to lay atop of.

I used a bad word. A potty-mouth word.

I don’t casually swear in front of my daughter. I didn’t realize the sound that emanated from my mouth was so offensive. It’s amazing what you can pack into four letters.

If you have young children nearby, consider yourself extremely sensitive, or Santa hasn’t definitively placed you on a list yet, ready yourself. I’m about to type the word, for reference purposes only. Just hold your thumb up over the next line.

I used the word ‘crap’. I described it as ‘crap’. “Where,” I asked, “do you suppose all this crap comes from?”

Glyph, shocked at such a thing, scolded me. “That’s a bad word, father. Isn’t the culture coarse enough without you contributing such applesauce?”

“Flummery!” I thought. “What fribble of flam just escaped my lips?”

As is my habit, my voice acted before my mind fully engaged. “Sorry, daughter, but there are no substitute words to describe such a growing mound of coprolite.”

She gave me her well-practiced +2 Raised Eyebrow of Scorn. One day she will make a formidable Mom. “I will make a list of no less than one-hundred synonyms. Once delivered, you can excise that word from your vocabulary.”

I did the math silently in my head. After ruling words offensive, insensitive, racist, or outright illegal, the Marxists haven’t left a hundred words in the English dictionary. We’re only left with emojis, and only the happy ones at that.

“Agreed,” I replied, confident that she would learn a valuable lesson about being offended, and I could continue using simple, straightforward words to describe the drivel I write.

My brain was filled with ’tish’ and ‘fubblecock’ and other heavily-coded some-letter-removal-required salty language. We had both failed our respective sides of my carefully-crafted parental equation.

The secret to all creative endeavors is mindfully excreting a mountain of material, maintaining composure as your muse roars with laughter, and observing carefully as she opens her vault and tosses you a pearl of an idea. The trick is to humbly accept the help and embrace the madness. It’s even better if you can steal the combination.

Which is how I came up with the idea for Tempest in a Teardrop Potty Mouth Corrective Sticks. Our great-grandparents used soap as a punishment for bad language, but Dr. Spock labeled such an effective treatment as ‘cruel’ in order to sell more books. The Boomers were too busy reliving Woodstock to make a suitable replacement. Gen Xers embraced the suck and simply didn’t care. Millennials leveled up and greatly expanded the list of obscenities. Twice.

Something has to be done. It’s up to Generation Zyklon. Glyph is a prototypical member.

I’ve been experimenting with our initial flavor: Monsanto. I’ve been typing this post with a Monsanto-flavored Potty Mouth Corrective Stick wedged firmly between my teeth. I have Nancy Pelosi-face: the one she makes when she realizes a Trump vote got through a counting machine unchanged.

Believe me: I’m physically incapable of saying [redacted] let alone any other word.

This is a huge idea, especially when combined with virtual delivery methods. That’s right! You can experience the effectiveness for yourself right now. Just stick out your tongue and place it firmly on the prototype below. What do you taste? Dust? Spittle? Old coffee, sputum, or Twitter leavings? That’s Monsanto! 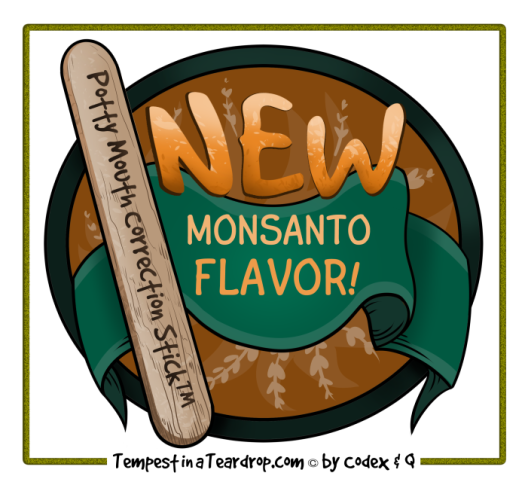 Isn’t the internet an amazing invention?

Now it’s up to you, good reader. Improve our societal discourse by bookmarking this post. Put it on social media sites all over the internet. Encourage people to clean up their mouths by licking their screens. Who knows? With enough effort, the whole thing could go viral!

P.S. If you taste a hint of hubris you weren’t expecting, that’s our latest flavor: iCk. Sorry about that, I accidentally spilled some during editing.