Now, I’m not quite sure why we haven’t run a happy, happy fun tears story at Tempest in a Teardrop before now [Codex: Editor here. We’ve never run across one.], but that changes today! Pull out your tissues, nestle close with a scoop of your favorite ice cream, and let’s celebrate the human race. For the first time.

You should know that this story begins in Poland, travels around the world, and then ends there. I can’t read Polish. Or Chinese. Or Brazilian. Wait… a chunk of my family is from Brazil. I’d better mention they speak Portuguese there. I don’t read Portuguese. This means that I may have some of the details wrong. I’ve tried to do real research on the internet before, and it rarely goes well. [Codex: Editor again. That translates into the more fanciful stuff below is hyperbole. If you can’t tell which parts, then you should probably stick to Yahoo! sports.]

Meet little Miloszek Malysa. If you are reading this behind enemy lines in the United States: that’s a baby. A live one. Little Miloszek has a serious heart defect at the ripe old age of 8 months. In Poland they have medical care and don’t turn babies into vaccine goo. Unfortunately, only surgeons in Los Angeles can perform the operation. They need money to fly from Poland, that’s the country sandwiched between Russia and France, hire security, sneak him into the hospital, get him the life-saving operation he needs, and then sneak him back to Poland, Mission: Impossible style. 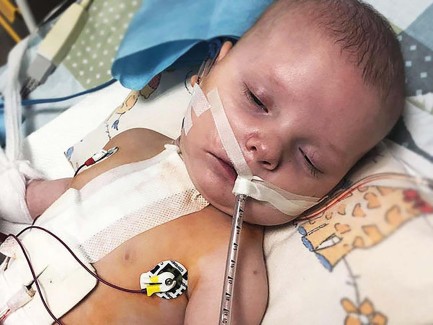 A very ill baby with a defective heart. A life-saving operation is available.

That’s an expensive operation. The security operation, I mean. The doctors won’t come cheap either. If they flew to Mexico City and then floated across the Rio Grande… never mind. The family estimates it will cost 1.5 million Zlotys. Zlotys is Polish money, which is as much fun to say as it is to spend. That translates into US Monopoly money to the tune of $385,000. Keep in mind the median income in Poland is about $22,000/year. I think. Currency conversions hate me almost as much as internet research.

The family has raised a little over half the amount.

Now meet Maria Andrejczyk. No, I don’t know how to pronounce either of their names. I should call my brother-in-law. He’s from solid Polish stock. I think that wing of the family is still speaking to us. Not that it would do any of you any good. I suppose I could pass you his number on the sly. In the comments, I mean. He works in IT; I think he likes random phone calls from strangers.

Maria is just your normal Polish woman. She’s 25, dating a 27 year old dude. I think he is a coach. See, completely normal. Maria throws spears for a living. Hey, some people make cartoons, some chuck spears. We aren’t judging. Not in light of what Ms. Andrejczyk recently did.

Maria started throwing spears – I guess technically they are javelins – at about age 6. Poland had a lot of holdover communists after the Solidarity movement in 1980s and became a free country when the Soviet Union fell in 1989. She was good at it too, and had the discipline to stick to skewering communists. I would… not be as responsible. [Codex: Editor: Can confirm.]

She was so good with the javelin that she participated in the Rio Olympics in 2016. There aren’t very many communists in Brazil, so she didn’t do very well. In fact, she didn’t even win a measly Bronze Medal.

Maria is not a quitter. We should all take that lesson to heart. She continued to hone her craft, because Poland still had plenty of communists upon which to practice. Wait a minute… the United States is positively overflowing with communists. Oh, never mind. I just checked and they only let woke deviants who defile the flag onto the USA Olympic Team.

At the Tokyo Olympics, which I think might still be streaming on NBC, she took second place. Tokyo is a country somewhere off the coast of China. She won a silver medal. I didn’t think Tokyo had any communists, but the Chinese Olympic team volunteered their weakest member. Communists do that sort of thing.

Oddly enough, a member of the Chinese team, not the one Maria impaled with her Silver Medal throw, named Liu Shiying took home the Gold. She hit a Uiygar running at full sprint. According to China, he had escaped from Happy Funtime Kitty Camp where he was learning safe and effective organ removal techniques. I think I watched the video, and it was an impressive throw. 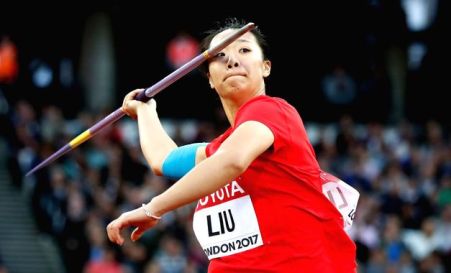 I won’t link the winning throw here, because we’re celebrating second place for the first time.

Now, they say the Olympian who takes home a Silver Medal is the most unhappy Olympian of all. You’ll have to look that up (John Wilder wrote on this not too long ago – leave a link in the comments if you’d like, JW) but what Maria Andrejczyk did next was heroic. She heard of the plight of little Miloszek Malysa, and she auctioned off her newly-won family heirloom.

“The true value of a medal always remains in the heart. A medal is only an object, but it can be of great value to others. This silver can save lives, instead of collecting dust in a closet.” — Maria Andrejczyk, speaking to a Polish TV station. I’m assuming that’s been translated from Polish, and I’m also assuming she wasn’t speaking to the TV station itself but to a reporter, but I can’t confirm those things because I’m only copying from the article I read this story from. Sports writers only get the details correct when the story is about balls: It’s how they roll.

The Polish convenience store chain Zabka put in the winning bid at $125,000. Little Miloszek will get his life-saving operation. Zabka then did something amazing. They returned the medal to Maria. May Poland carry the banner of a moral and God-fearing people into the future, where one day they can share it with countries who have abandoned it, and must spend time in an Earthly Hell earning it back.

I’m off to dry my eyes (allergy season is bad), eat my ice cream, and sharpen a stick. I don’t need to win a medal at the Olympics.

11 thoughts on “A First! Prepare for Happy, Happy Fun Tears”