Welcome to Hystory: Hysterical History. Pull up your fainting couches while an old spork explores Prohibition. If you’re already prone because I made up a word, this is going to be a rough ride. It gets much, much more ridiculous. Turns out we’re not living in the first Clown World. 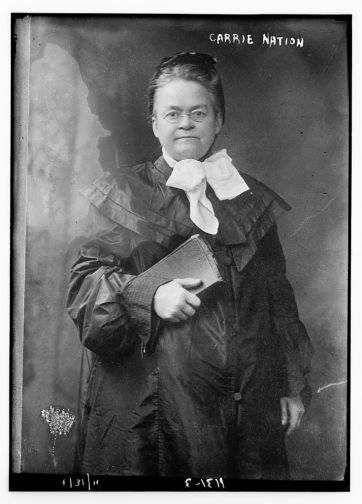 Meet Carrie Nation. It was a different era in the early 1900s: They had Carries. Mrs. Nation hated all things booze and started a local branch of the Woman’s Christian Temperance Union in Medicine Lodge, Kansas, in 1889. It wasn’t very popular because Carrie was terrible at marketing. She didn’t have the face for it.

That all changed on June 7, 1900, after God (not kidding) told her to visit Kiowa,  Kansas, where she walked into Dobson’s Saloon, told the men “I have come to save you from a drunkard’s fate,” and proceeded to smash bottles of perfectly innocent liquor with rocks she had collected along the way. It was a modern day David vs Goliath moment.

She upgraded her weaponry to a state-of-the-art-hatchet (+2) called “Salooner’s Bane.” Carrie Nation would become a household name all over America. Smashing up saloons? On a crusade from God? With a weapon that matched her signature look? Marketing Genius Achievement: Unlocked! 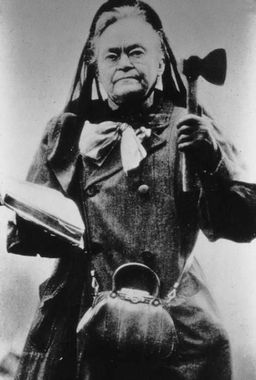 Carrie Nation. Crusader. Marketing Genius. The hatchet should look bigger, but the size of her scowl dwarfs it.

Carrie soon attracted a large following of women. They would march forth, singing and swinging and smashing every bottle of hooch that failed to run away. It was an early prototype of a Twitter mob. The Temperance Movement had come of age wearing the hectoring face of Carrie Nation squarely upon its shoulders.

Carrie passed on in 1911. She never got to see the mayhem her old skool virtue signalling would induce over the next two decades. 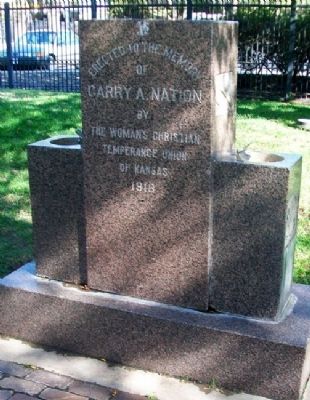 Well-behaved women rarely make history, or have memorial drinking fountains in Wichita, Kansas. It spews Gin every June 9 in memoriam of Carrie Nation’s death in 1911.

The Temperance Movement was huge. The KKK was the enforcement arm. It contained pastors, government officials, bankers, high-society Freemasons, Congressmen, and many, many women who accused their men of being constantly drunk, unemployed, and de-limbed from The Great War, which was a vicious affair fought between 1914 and 1918. In Europe. Where wine and beer are socially accepted because their water was infected by rotting archdukes.

Basically, Carrie’s foot soldiers were solid, meek-of-the-earth, well-meaning and righteous Christians.  My people. Don bag of shame. It wasn’t a great decade or two for the Gospel. Drinkers were evil. Bootleggers were not known for quality control. Poisoning, blindness, and paralysis were all known side-effects of imbibing illegal giggling juice: That was God, Meting out Justice.

According to Andrew Sinclair, writing in his book (1962) “Prohibition: The Era of Excess” in which he quotes an article from a 1929 issue of New York American, those who drank should be

I know. It was like they channeled the Taliban a century hence. If they had discovered Jesus drank wine they would have crucified him. That’s okay: It would not have been His first time.

In 1926, when the Prohibition Bureau began the poisonings in earnest, Temperance Movement members were quick to justify the government action (See Part III). Drinkers were “getting what they deserved”. “It’s a good start”. “We have to kill some of the herd in order to save the rest.” It’s kind of eerie. It’s like the future sent a rage mob back in time so we wouldn’t have to deal with them now.

5 thoughts on “Hystory: Prohibition I – The Carries”