Leg Stolen from L.A. County Coroner. Imagine, a human leg was stolen in the land of weird. I’d thought this was more of a Las Vegas thing, but I’ve been wrong before. If your sister-in-law asks if you want breast or leg meat during your Thanksgiving feast, you’ll want to go with pizza just to be on the safe side. If you order that pizza from Domino’s via emoji, and the return emoji features a succulent looking gam, you may want to try Pizza Hut instead.

Friday’s comic featured a “pop 450″ reference, which is the number of Vile Faceless Minions. Err, was. Less than 24 hours later, Vox Day released an updated total of 454. This number is almost certainly out of date as you read this paragraph. We meant no disrespect, and so far have not been poisoned or guillotined or electrocuted, the way you’d expect for displeasing the Evil Lord of Evil.

We discovered Terri the Potato had, in fact, not hitchhiked home after Sasquan, but has been stowing away in our kitchen for almost three months. We caught her making mischief with a friend. We’d been wondering why the peanut butter didn’t seem to last very long, and were working out a supernatural explanation for comic purposes. [*Q* was working on a supernatural explanation. I figured it would involve Bigfoot. Bigfoot would have been normal. Ben Carson has not figured out a way to teleport peanut butter through subspace, and even if he had why steal it from our cupboard? Why wouldn’t he steal it from Safeway, like everyone else? – Codex]. 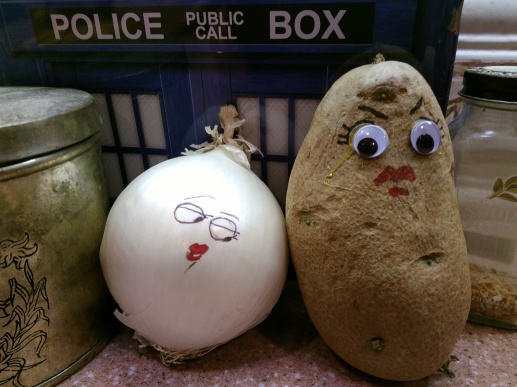 Glyph’s soccer team played the cowbell team once again. Their cowbells sounded muted in the rain, and they only got to ring them three times. It would have been less, but the referee was a parent on the other team and repeatedly called our team for anything he could. He even called ‘hands’ on a girl after the ball ricocheted off the goalpost and hit her on the humerus.  The subsequent goal kick was blocked by our goalie, who had some incredibly good saves. He did finally call a hooking foul on his own team, putting a sudden halt to our own team’s break (four forwards on two defenders… good odds). Yeah, thanks Mr. Ref.

Glyph and I talked about it after the game. Regardless of either of our feelings, it did demonstrate one thing: life isn’t fair. Deal.

We finally got our puppy! He is a German Shepard/Collie mix.

After much deliberation I named him Calcifer, the name of the fire demon from Howl’s Moving Castle. If you haven’t seen it, do yourself the favor and track it down! The name seems to fit, it was inspired by his smoky coloring.

I forgot to ask the breeder (a family friend) when he last ate, but soon discovered the answer. He puked all over Glyph on the ride home. Glyph was a trooper about it, as she cleverly dodged it with the towel in her lap and caught most of it with her hand, pant leg, and boot. The inside of the boot. I rinsed it a couple of times before deciding she needed a new pair anyway. They were cheap knock-off Uggs from Costco. I’ll gladly spend that $10 again, under the circumstances.

We are anticipating a long first puppy night, so I’m off to bed. Probably not to sleep, though. I’m happy to take that trade 🙂