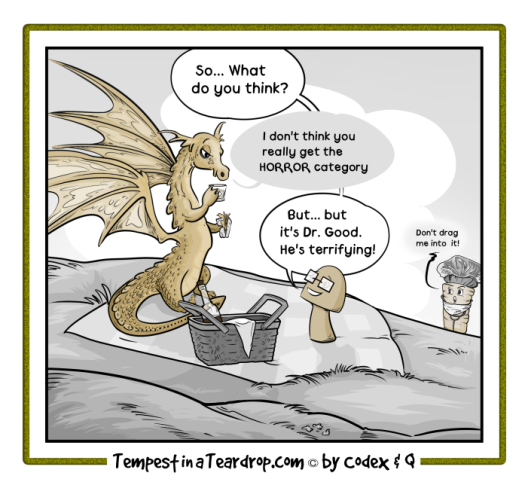 For all you procrastinators out there, here are some reminders of great stuff that Codex & Glyph read, watched & played. Caveat: A couple of them are somewhat… idiosyncratic.

Best Fantasy Novel: Tithe to Tartarus also by the same author. What can we say? Codex has always been a big fan.

Best Young Adult / Middle Grade Novel: Rachel Griffin #4 The Awful Truth about Forgetting by Jagi Lamplighter. This one was tough because we went head to head on Lamplighter vs. Stroud. But then we remembered: Alternate History! And if you’re a grown-up and haven’t read the Lockwood Files because you think it’s greasy kid stuff… you’re missing out. Best Alternate England since Joan Aiken’s Wolves of Willoughby Chase.

Best Military SF: Galaxy’s Edge #2 Galactic Outlaws by Nick Cole & Jason Anspach. Another favorite was the new series by Peter Grant, Cochrane’s Company, about building a merc company and fighting corrupt socialist governments and evil mafia (but I repeat myself).

Best Horror Novel: Turned Earth by David the Good which may seem like a bit of stretch, but keep in mind, it’s in a category all it’s own. It’s SF. It’s action-adventure. It’s comedy. And, if you identify as a mushroom, it’s HORROR. Oh, the horror! Mammalian fans might prefer Brian Niemeier’s Soul Cycle Book 4: The Ophian Rising.

Best Graphic Novel: Rust #4 The Soul in the Machine by Royden Lepp. If you’re not reading the Rust series, run out and get them. Some of the most beautiful storytelling this side of Stand Still Stay Silent (Book 2 of which will qualify for next year’s Dragon, just FYI.)

Best Fantastical TV series: The Father Brown Mysteries on BBC. This one’s an imaginary history of Britain in which one tiny little 1950s town has something like a gazillion murders, and a Catholic priest from an alternate universe. But we still like the show a lot.

Best fantastical PC or console game: Subnautica by Unknown Worlds Entertainment. Everyone played through it compulsively.

Best Fantastical Board Game: Bears vs. Babies by Elan Lee & Matthew Inman Not as good as Exploding Kittens, but still a lot of fun.

Best Fantastical RPG: Stuffed Fables from Plaid Hat Games. Great for playing with teens & older kids who can really get into nostalgia. Adults can give it a FNAF vibe and go full horror if they want.

As you can read, the were a few categories we didn’t vote on.. The Dragon Awards are great: you can just leave a spot blank for, say mobile platform games if you don’t play them, or media tie-ins, if you haven’t read any this year.