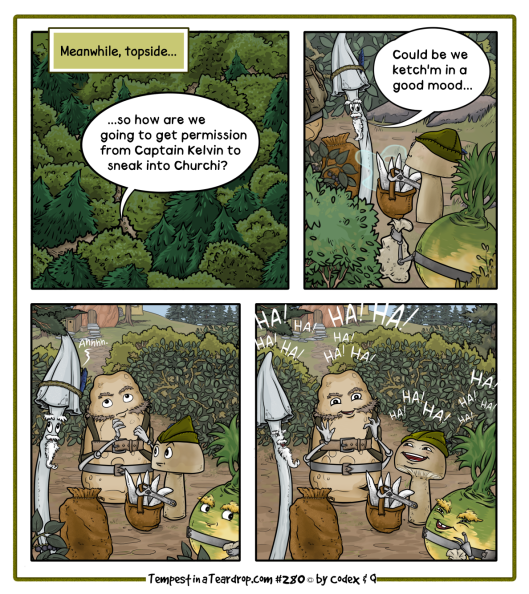 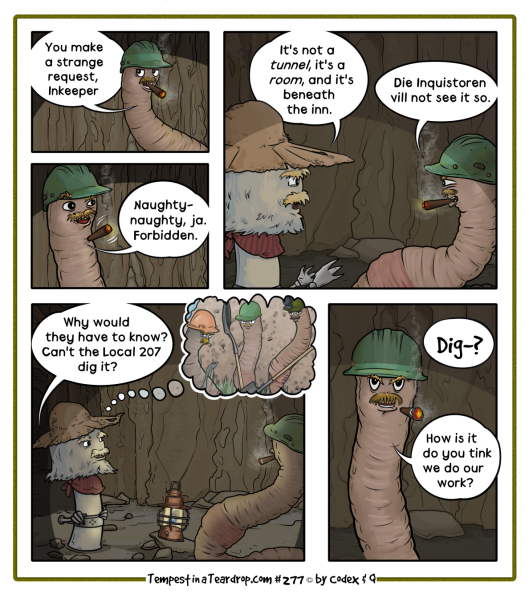 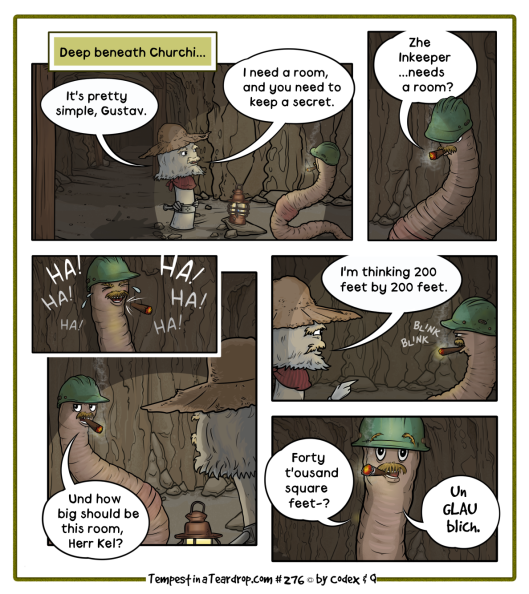 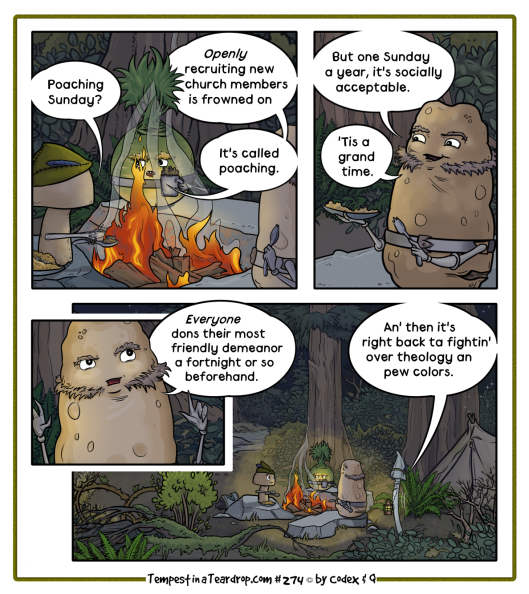 Posted by overgrownhobbit | Filed under Uncategorized

We’ve decided to create “Tape Henge”. Codex has dubbed it “Today’s comic is going to be late.” 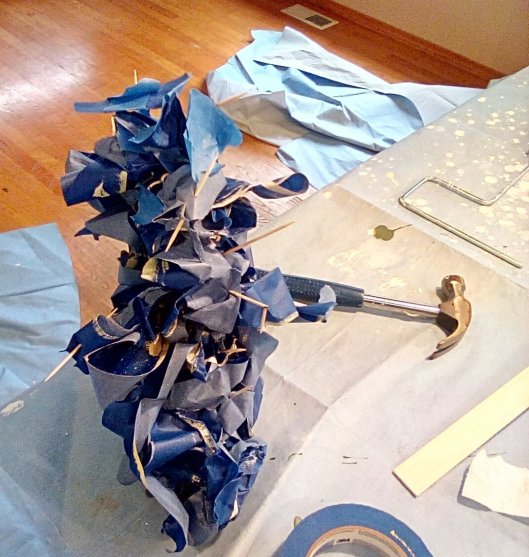 We’re deep in the throes of repainting the kitchen. Right now it looks as if the Avengers had a battle in it, and lost.

Codex is busy in the pixel mines & should be done, but isn’t willing to stay up until 3am again. What a wuss.

So before Codex spins her tale, here’s the TL’DR: These are great reads. They’ve got teen characters, and serious stories; loads of action, and moments of humor. They don’t hate Christ, and you wouldn’t be embarrassed to read them with your teen. Most can go young, all the way down to middle school (but read them first O parents! They were not written specifically for children) because the situations and the stories have enough sheer universal coolness to work, though the reader needs to have the reading chops to appreciate them. If this is old news, skim down to Codex’s ranty tale of woe and gratitude.

I used to love stories about girls who ran away dressed as boys to go find adventure. That was when the stories had some vague connection to the reality of either the male or the female sex, and the reasons why a girl might do such a thing. And no, the answer isn’t always “Patriarchal Oppression” because boys drool and girls rule. Lydia is running away because she’s desperate. She has her instrument, almost no funds and the clothes on her back. She was literally imprisoned by her step-family and desperate to find her surviving brother. She ends up on the streets, and only a moment of luck – in a kind of sex-swapped Aladdin moment, when the prince goes slumming – allows this diamond in the rough a chance. A chance to find a role in the palace as the ruler’s advisor, musician, and friend. Like all the best Romances in prisoner of Zenda territory, this one has a romance. It’s sweet and satisfying, and doesn’t interrupt the plotting too much.

Readers note: there are exactly 4 typos in the book so please ignore the piggie reviewers who claim it’s a hot mess. because of them.

Between Home and Ruin: Fall of the Censor by Karl Gallagher

We have met the aliens and they are us.

Once upon a time, a bunch of wild-eyed individualist pioneer types lived in a bubble protected from the wider galaxy. They invented a way to get out and explore and sure enough they ran into a Space Empire. Like you do. For a while they managed to run a con on the locals by pretending to be from France, but eventually the local authorities wised up. It’s a lot more exciting and complicated and romantic than that, of course. Spoiler alert: They don’t all die at this time. That’s book one. This is book two, and Yes, the author makes jumping into the story midway painless. But you will curse yourself for spoiler-ing the amazing first book. The age of sail intersects with high concept SF while being thoroughly anchored in real people with all their warty glory. It’s got Pogo’s “we have met the aliens and they are us”. Go get book one, then this one. You’re welcome.

Responsiblility of the Crown by G. Scott Huggins

Dragonkin that are seriously cool, not cringe-y.

Young Respy has spent her entire life caged and tormented. She’s a member of an evil totalitarian race, captured and enslaved by a nomadic clan who spend years on the deep ocean of an alien world. The Century ships breed generation of the tribe for whom the homeland is only a story their great grandparents tell. Respy’s race are violent maruaders who burn and destroy and steal, and she’s alive only because the ships’ crew are just barely too afraid of them to kill her. The book begins when the girl manages, with a mixture of luck, resourcefulness, and the shared loyalty and support of her only friend, another outcast, to escape into a wider world of choices and possibility.But every step forward demands more from her and forces her to widen her perspective about the people she thinks she knows. Although there’s plenty of good vs. evil in this bildungsroman, and fun pulp-fiction adventure, the author weaves good vs. good conflict into the tale as well.

The Tower of Babel is a real multi-dimensional evil empire eating all of reality, and yes, it’s just arrived at our earth. So of course, a young man follows a beautiful girl through a door into madness and discovers the truth about who he really is. The downside: The story isn’t done yet!

Math and magic and the secret history of the world make this the Dan Brown novel (with teenage protagonists) he could’ve written if he’d been half-way educated. Or honest. Three book series!

Andre Norton is briefly reincarnated by a middle-american renaissance woman in this coming-of-age story.  Jem is a young man finding his wings on an intestellar merchant ship. Action and adventure and loads of heart, and an awesome beagle. Stands alone, but you’ll want more.

No intermittent smatterings of one-world government, smug atheism, or weird pervy stuff, just a young man in a rubbish world discovering and thwarting a nasty government-corporate-academic plot and finding his place. Alien planet coolness a bonus. Only three Rod Walker (all stand-alone) books exist: I wish there were more.

Visit your local public library, hit the teen section and you’ll be reliving my childhood. I still remember the halcyon days of Mrs. Young’s children’s collection. There I discovered half-magic, Psammeads, three-ringed moons, Jane Eyre, the blackest heart in Battersea, Matthew Looney, and the last unicorn, just to name some of the stories now sitting across from me in my home library.

Oh, I don’t mean you’ll get to spot those books.

No. You’ll get to relive the moment when, as a young teen, she introduced me to… Let’s call him Bob, the new Young Adult Librarian. “Young adult” was late-1960s library-speak for “teenager”, and there was now a new section of the library just for us! For me: a newly minted 14-year-old. So poor Mr. Bob gave me “My Darling, My Hamburger” and that was when I understood for more than a decade that “Young Adult” = “Stupid books”. It got better, loads better, and for a time “young adult” or teen reads were the books where story went to hide, just as juveniles were where fairy tales hid from the bleak and dreary grey-goo realism-and-relevance crowd.

We seem to be reliving those days. It’s getting harder and harder to find good new novels for teens that aren’t dishonest, marxist, woke, perverted, foul-mouthed, and explicity anti-American, -white, and -Christian stories. Or some combination of all of the above. The rot is going younger and younger as well. Books like Andre Norton’s Dread Companion don’t exist in tradpub now: the male character would be emasculated, the female empowered with a capital POW, the races egregiously non-white Just Because, and definitely oppressed thereby, and there’ll be some socialist or climate change or God-is-fake or institutional raaaaaaaacism mini-sermon embedded in the tale. The most a reader can hope for is a getting a decent plot without too many sermons, and characters who, while checking every ticky box imaginable, still have something approximating human personalities anyway.

Remember when this was happening in movies? When the story would get interrupted for a genuflection to Sancta Racisma or St. Gay or the high holy narrative of climate stasis (praise be Gaia!)-? It was socjus Tourettes: Dr. Who would be saving the galaxy and two walk-on janitors would be gay married. Or support gun-control. Because. The viewer would be forgiven for imagining that the writer in charge was possessed of a particularly stupid demon. It’s happening regularly to teen novels and even middle school books. Only children’s fiction is holding something of a line. For now.

Thanks be for independent authors. Please keep making your books available for libraries and as long as I can, I’ll keep ordering them. Because diversity, and inclusion you know. It’s only equitable.

I read the novella, All Men Dream of Earthwomen, when it was first released as a freebie. Again, as part of a bookbinding project, and now a third time as it’s released as part of this book (Huzzah!). 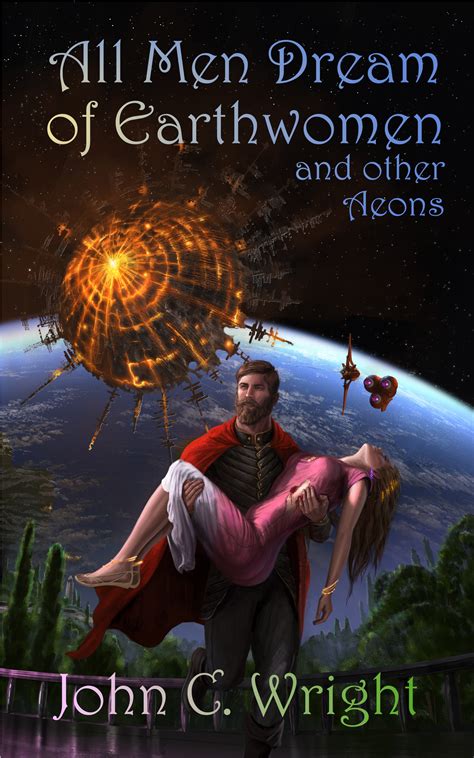 It has not palled. If you like science fiction with real science in it, and the sensawunda dialed up to eleventy… AMDoEW is your book. The romantic story – romantic in the Prisoner of Zenda sense – of a clever heavy-worlder-Quasimodo and his weird alien love (alien, because human, like us), is full of swash and buckle and turns of wry humor. The ending is perfect. END_OF_DOCUMENT_TOKEN_TO_BE_REPLACED 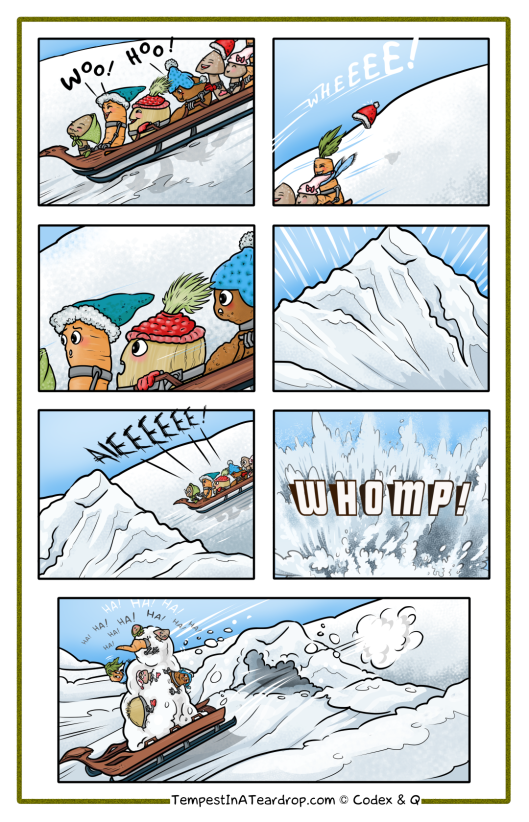 Posted by overgrownhobbit | Filed under Uncategorized 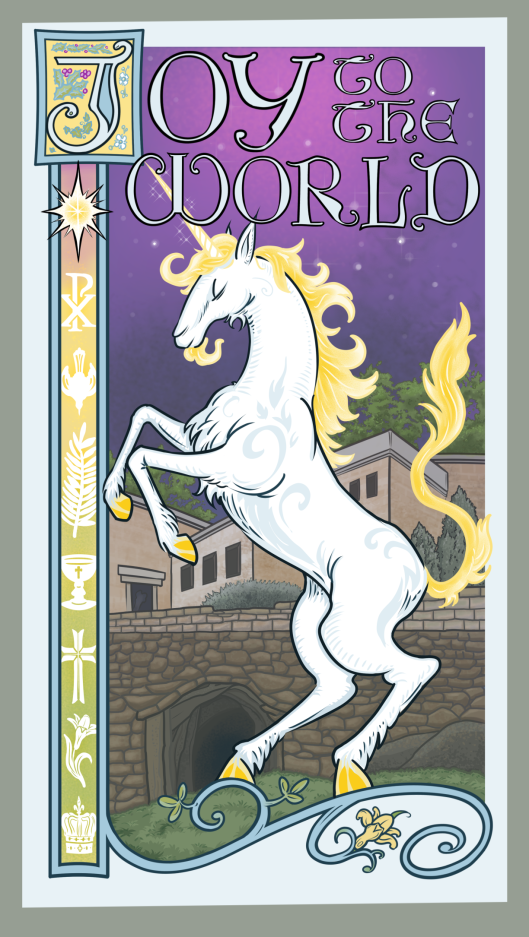 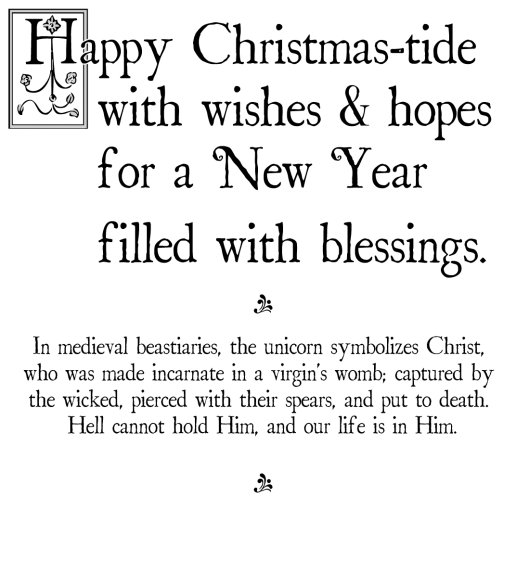 But my horn shalt thou exalt like the horn of an unicorn: I shall be anointed with fresh oil. Mine eye also shall see my desire on mine enemies, and mine ears shall hear my desire of the wicked that rise up against me. The righteous shall flourish like the palm tree: he shall grow like a cedar in Lebanon. Those that be planted in the house of the Lord shall flourish in the courts of our God.